IKEA has made its first venture into audio products with a collection of Bluetooth-enabled speakers named Eneby.

The Scandinavian furniture giant will release its Eneby speakers in two sizes later this month.

Each feature fabric-covered fronts, with a simple circular dial detail that has a small light to indicate when the device is powered up.

To help them fit into different settings, IKEA designed the device so it could be either be wall-mounted or simply placed on a flat surface.

Each speaker is sized to fit within the compartments of IKEA's Kallax or Eket storage systems.

"The new Eneby range is incredibly exciting for us," said Evanthia Nikoglou, sales leader for lighting and electronics at IKEA UK and Ireland. 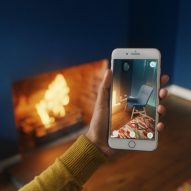 10 game-changing ideas and innovations from IKEA

"Sound, just like light, is an important part of creating an atmosphere within the home. It is able to bring a space to life and give it soul which is why we’ve turned our attention to sound and created IKEA's first ever speakers," she continued.

The range features a simple colour palette that pairs black or grey polyester fabric with black or white plastic.

A handle on the smaller speaker allows it to be carried around, while a battery pack enables it to be used on the go.

If they're not in use, the speaker will switch itself off. An auxiliary cable means it can be used to connect devices that don't support Bluetooth.

The smaller Eneby will be priced at £45, and the larger at £80. Both stands and additional battery packs are sold separately at £15.

The speakers follow an announcement last year, that the company would be launching a collaborative collection with audio brand Sonos in 2019 as part of its Home Smart initiative.

IKEA, founded in 1943 by the late Ingvar Kamprad, was named the most newsworthy force in design on Dezeen Hot List 2017 for its vast range of initiatives over the past year. 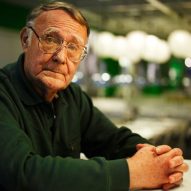 "Kamprad is dead, but IKEA has a long way to run"

These include the introduction of snap-together furnishings, which do away with fiddly Allen keys, and a collection of no-waste products.