The local architecture studio was employed by the council to discretely redesign the burial ground to create a place for quiet contemplation.

As part of the brief the architects changed the layout of the cemetery, which sits surrounded by fields just outside the town, to address the "lack of intimacy" previously afforded to funeral processions.

"We had been commissioned to study a comprehensive arrangement of the cemetery area in order to remedy the inconvenience characterising the funeral processions, which were forced to travel in a congested road," architect and studio founder Mirco Simonato told Dezeen.

"Designing the new entry to the graveyard, we decided to take advantage of the presence of a pleasant countryside road on the opposite side of the previous entrance," added Simonata. "Hence, the funeral processions may now proceeds crossing a peaceful countryside landscape, more suitable for accompanying the dearly departed paying the last respects."

Having moved the entryway for Farewells Court to a more secluded spot, Mirco Simonato Architetto added a white walled courtyard to provide both a neutral backdrop for religious services and to shelter the priest conducting them.

Four staggered wood-topped benches shaded by four trees have also been added to this space, to provide a place for private prayer and meditation when not in ceremonial use. A simple wooden cross is mounted on one of the white walls.

An opening in the wall of the courtyard leads to the walled burial ground on the southern side of the grounds, and the columbaria and family chapels to the north of the site.

"The use of the white alongside the extreme simplification of shapes have been functional for creating a calm and respectful atmosphere," added Simonato.

"Moreover, these choices has emphasised the role assigned to the light, which becomes a fundamental element in the perception of the place due to the ongoing variation of light and shade."

The columbarium, which has niches for the storing and display of funeral urns, is covered by a flat-roofed portico with white columns along the front. The roof is lifted over the columbaria wall to allow daylight to filter through. 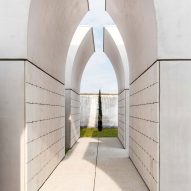 Extending out from under the colonnade, the columbaria wall has a separate, sheltered entrance on the opposite for an ossuary.

In another northern Italian town of Bergamo, CN10 Architetti built a trio of white concrete and marble broken arches to house ossuaries for a cemetery.

When the final phase of Farewells Court is complete there will be four rows of identical covered columbaria, and six family chapels.

Currently a single white family tombs sits between the columbarium and the courtyard, shaped like simple rectangular gabled houses. The pitched roof align with the portico and peek over the courtyard walls, whilst the tower of the Catholic church can be seen in the distance.

Rectangular openings on either side of the mausoleum show the tree-planted interior, and a simple low white gate provides access.

Paved pathways link the memorial sites, which are surrounded by lawns and newly planted trees. Another simple rectangular bench with a tree sits between the columbarium and the mausoleum.

On the other side of the courtyard, the graveyard is also bounded by white walls and trees have been planted to offer shade and create a contemplative atmosphere.

"The project includes and fills with greenery the spaces that will be developed in the next phases of the design process," added Simonato.

"This gives the sensation of a completed and coherent space now and in all the developing phases of the process."

Simple forms and uniform materials also help to lend a sense of peace and calm in a concrete and weathering steel funeral home by Salas Architecture + Design, which tilts towards the sky at one end.