Uber has acquired electric bike-sharing service Jump, in a bid to further expand the modes of transportation available to its users.

Currently undergoing testing in San Francisco, Uber Bike by Jump will allow users to hire dockless electric bikes directly from the Uber app across the city.

By tapping the "bike" option in the app's menu, users are able to see nearby available bikes and reserve one. Once the ride is complete, users can lock the bike to any public rack in the designated zone shown on the app's map.

"Our ultimate goal is one we share with cities around the world: making it easier to live without owning a personal car," said Dara Khosrowshahi, Uber's CEO. "Achieving that goal ultimately means improving urban life by reducing congestion, pollution and the need for parking spaces."

Launched in January this year, San Franciscans who wanted to use the Uber Bike by Jump service were required to join a waitlist to be part of the trial. They could then choose from 250 Jump bikes available in the city.

"Jump's CEO Ryan Rzepecki is an impressive entrepreneur who has spent the better part of a decade bringing bike-sharing to life across the globe," added Khosrowshahi. "I'm thrilled to welcome his team and their stellar product onto the Uber platform."

Rzepecki set up Jump Bikes in 2017 after three years in development. The bikes are made in New York city while the service operates in San Francisco and Washington D.C with plans to launch in Sacramento, California and Providence, Rhode Island before the end of the year.

The announcement of the acquisition by Uber also hinted at more modes of transport being added to the app in the near future with the CEO asking customers to "stay tuned for more news as we introduce additional ways to move around your city".

At last year's Web Summit in Lisbon, Uber's head of product Jeff Holden announced that the taxi app had signed a contract with NASA (National Aeronautics and Space Administration) to develop low-flying aircraft for urban environments. 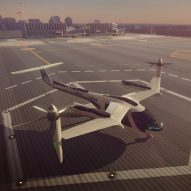 A prototype for the cabin of the electric, self-piloting air taxi was unveiled by Aircraft manufacturer Bell Helicopter at the Consumer Electronics Show, with the on-demand electric aircraft taxi service is scheduled to begin flights in Los Angeles in three years time.