Uber has partnered with NASA to develop an on-demand electric aircraft taxi service, which is scheduled to begin flights in Los Angeles in three years time.

Speaking at the Web Summit in Lisbon yesterday, Uber's head of product Jeff Holden announced that the taxi app had signed a contract with NASA (National Aeronautics and Space Administration) to develop low-flying aircrafts for urban environments.

It will begin tests in Los Angeles in 2020, and subsequently Dallas, Fort Worth and Frisco.

"This Space Act Agreement paves the way forward for Uber to collaborate with NASA on the development of next-generation airspace management technology," he said.

"UberAIR will be performing far more flights over cities on a daily basis than has ever been done before," Holden added. "Doing this safely and efficiently is going to require a foundational change in airspace management technologies."

UberAIR forms part of the ride-sharing apps' Elevate initiative, which would see cars replaced with electric aircrafts that are capable of taking off and landing vertically as a quicker and more environmentally friendly way to travel.

The planes, known as Vertical Take-off and Landing aircrafts (VTOLs), will carry up to four passengers and will also allow users to share rides.

A movie previewing the air service shows that it will function much like Uber's current app, through which users can order a taxi on-demand with payments automatically deducted from stored card details.

Notorious for its bad traffic, Uber believes Los Angeles could see its transport drastically changed by electric planes – with an 80-minute journey on the ground taking less than 30 minutes in the air.

"In this case, technology will allow LA residents to literally fly over the city's historically bad traffic, giving them time back to use in far more productive ways, whether more leisure time with friends and family or more time to work," said Holden.

"At scale, we expect UberAIR will perform tens of thousands of flights each day across the city – at those levels, all the time savings will have a noticeable positive impact on the region's economy," he added.

To develop the infrastructure, such as takeoff and landing hubs, Uber will partner with Sandstone Properties, a real-estate investment company.

With tests beginning in 2020, the company hopes that the service will be fully functioning when Los Angeles hosts the Olympics in 2028. 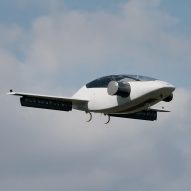 Uber was founded by Travis Kalanick and Garrett Camp in 2009 as a black car service for 100 friends in San Francisco, and has gone on to kickstart a transformation of the taxi industry that has caused uproar in numerous countries.

Uber's partnership with NASA comes in the wake of vast advances in technology aiming to transfer travel from ground to air. Earlier this year, Munich start-up Lilium trialled the first VTOL, shortly after Airbus announced its plans to test a flying car.