The Shenzhen headquarters of Chinese tech giant Tencent is made up of two towers, connected by bridges to encourage staff to meet.

The building is designed specifically to prevent the 10,000 workers of the technology firm from getting siloed in their different departments.

Two glass and aluminium towers rise to 50 and 39 storeys respectively and are connected by three large bridges, clad in copper-coloured aluminium louvres.

Each bridge contains a specific set of facilities shared between the north and south tower, such as a health centre, a library, and a running track that loops between the two buildings.

"All of the programme that's on the bridges was in the brief, but the client wanted to put it down on the podium, so we really challenged the typology," lead architect Jonathan Ward told Dezeen.

"If you do that then you keep on perpetuating the problem of the high rise, which is disconnecting people," he added.

"We took all those shared amenities that are typically in the podium and split them up on to the three bridges to really get people to percolate through the whole building, to get people to cross paths and connect, and create more synergy and fresh ideas for the organisation."

Tencent is ranked the fifth most valuable listed company in the world – worth over $500 billion (£352 billion), making it currently more valuable than Facebook. 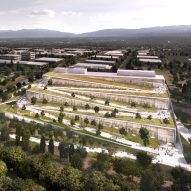 BIG and Google team up for terraced offices in Sunnyvale

Google has commissioned BIG for it's Sunnyvale campus, which will feature outdoor spaces on its ramping roofs, while BIG and Heatherwick Studio is building a "landscraper" for the company's UK headquarters that will be longer than the Shard is tall.

Shenzhen's severe land shortages meant the headquarters had to be built vertically, but still foster the intra-personal connections and innovations and these new tech giants crave.

"The high rise has been such a hard nut to crack, this is really the first time we've been able to challenge it," said Ward.

The sky bridges linking the towers are key to delivering Tencent's "vertical campus". The towers were built first, then the bridges were lifted into place by cranes.

Landscaped gardens line the outdoor areas of each bridge. The first bridge, which is suspended over the lobby contains the cultural link, with cafes, an auditorium and exhibition spaces.

The middle bridge hosts the health link, complete with the running track, gym, a full-size basketball court in the centre of the bridge, climbing walls, ping pong tables and a juice bar. The topmost bridge houses a library, education centre and conference spaces, as the knowledge link.

"They have an almost anthropomorphic characteristics," said Ward. "The heart is in the centre where the health is, of your body. The knowledge is at the top where your brain is and the intellect is. Down at the bottom, where your feet connect to the world around you is all the social, more urban programmes."

Employees enter the lobby from the basement level via escalators. Underneath the towers NBBJ designed a vast bus station to accommodate the public transport system most workers arrive by.

Building this basement level and supporting the soaring towers above was another challenge faced by the architects. Shenzhen's new technology area, of which the Tencent twinned towers are a keystone, is built on land that has had to be reclaimed from the sea.

Reducing the energy consumption and carbon emissions of 270,000 square metres of office space was another key goal of NBBJ, and they claim the buildings use 40 per cent less than a typical office tower.

Self-shading glazed facades helps prevent the towers from too much solar gain, reducing the need for air conditioning. Glass panels lean out on the south facing sides or tilt back and forth on the eastern and western faces, with their edges shaded by aluminium.

Sunlight glimmering on the undulating facades also communicates the playful metaphor NBBJ chose for the hub of one of the world's biggest Internet companies.

"The facade itself was initially inspired by the idea of the cloud," said Ward.

"We'd been looking at these [Chinese] paintings of these mountains coming through the clouds and connecting that to the internet cloud idea, and the cloud of employees that make up Tencent," he continued. "We were trying to connect the softness of the traditional paintings to the ubiquitousness of the cloud."