La Polychromie Architecturale is based on the French-Swiss architect's design guide of the same name. Created in the 1930s, the book shows how colour can affect spaces and moods and offers palettes and combinations to trigger different effects.

According to the designers, the collection is a "tribute" to the architect, who is widely recognised for his 20th-century modernist buildings.

It includes a palette of 11 shades –natural, black, ivory, sienna, green, orange, red, blue, and three shades of grey – selected from the French architect's original 63 colours, which Le Corbusier released in two parts in 1931 and 1959.

Users can combine these with other colours taken directly from the architect's Polychromie Architecturale palettes, which are licensed by Les Couleurs Le Corbusier.

"Secret d'Atelier is the only flooring company to be able to develop this remarkable colour palette," said the Parisian company.

"Our products are designed for both professionals and individuals who want to dress their floor with innovative, original and of impeccable quality flooring," it continued.

Le Corbusier's La Polychromie Architecturale was developed as part of his studies in colour theory. He believed that specific shades have the power to affect the perception of a space.

He identified roles that could be applied to different shades – for example, pale colour with natural pigments can be used to convey warmth and light, while darker shades can be used to highlight or camouflage elements in a room.

The Swiss-French architect, who passed away in 1965, was one of the greats of 20th century architecture. A pioneer of Modernism, Le Corbusier's best-known works include the Villa Savoye on the outskirts of Paris, the Ronchamp chapel and the government buildings in Chandigarh, India.

Ranked at number 33 on Dezeen Hot List 2017, the architect is still hugely influential with 17 of his projects added to UNESCO's World Heritage list in 2016.

His work has continued to influence everything from film festival identity to a collection of decorative wooden objects released by Cassina. 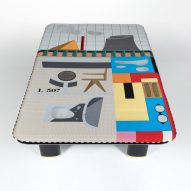