Guests will be able to ski down the zigzagging roof of this hotel by Danish practice Bjarke Ingels Group and onto the slopes of the Vallée de Joux in western Switzerland.

Work is already underway on the Audemars Piguet Hôtel des Horlogers, which BIG has designed for Swiss watch maker Audemars Piguet beside its workshop in the village of Le Brassus.

The 7,000-square-metre luxury hotel will stand next to another visitor attraction designed by Bjarke Ingels' architecture firm for the luxury watch brand – the spiralling Musée Atelier Audemars Piguet. 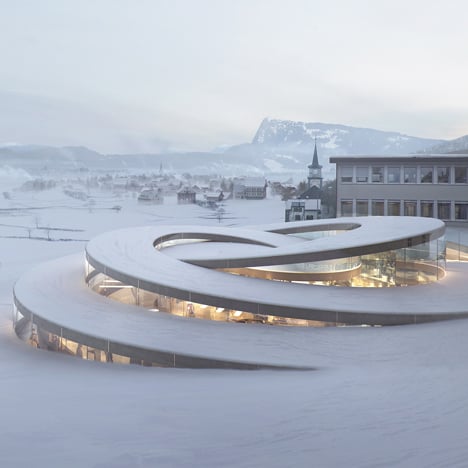 Like the museum, the hotel will feature a roof that slopes down to the ground to integrate the architecture with the sloping topography of the site.

The hotel comprises a stack of linear tilted slabs, which angle up from the ground to create a series of grassy terraces during the summer months and a piste in winter.

"The terrain fluidly becomes the roof, inviting guests to descent on skis towards the slopes of Vallée de Joux," said a statement from BIG.

The timber-clad hotel will host a pair of restaurants, a bar, spa and conference centre with views of the slopes.

The hotel and museum will provide visitor facilities beside the Audemars Piguet workshop, where the company has been based since its establishment in 1875.

The Audemars Piguet Hôtel des Horlogers is the third project by BIG that features a ski-able roof.

Ingels, who came fourth on the 2017 Dezeen Hot List – a list of the hot topics and the movers and shakers in the design world over the past year, is currently putting the finishing touches to the Amager Bakke Waste-To-Energy Plant. The power plant in Copenhagen will feature a ski slope on its roof and a chimney designed to blow smoke rings.

In 2011, the firm also unveiled plans for a ski resort in Lapland where buildings double as ski slopes.