An ashtray and door handle designed by Ludwig Mies van der Rohe for his unrealised Mansion House Square project in London have been recreated by London publisher REAL and ironmonger Ize.

The release of the products marks the publication of a book named Mies in London by REAL (Real Estate Architecture Laboratory), a cultural institute and publisher founded by Jack Self.

The 160-page publication brings together previously unseen material about the design of Mies van der Rohe's Mansion House Square – 19-storey amber-glass office block proposed for the City of London but thwarted by a campaign against it.

The project, which would have been the modern architect's only UK building, was also the subject of an exhibition at the Royal Institute of British Architects last year.

REAL made the decision to recreate the ashtray and door handle Mies van der Rohe originally had produced for the tower to help make the project "more tangible".

Both items were originally produced in the 1960s and sent by Mies van der Rohe to the tower's developer Peter Palumbo.

The original ashtray is now located in the RIBA collection. However, the door handles, which were initially installed in Palumbo's house were lost during a 1990s renovation. 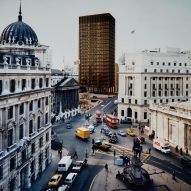 "So much work went into Mansion House Square, sometimes you forget it isn't real," Self told Dezeen.

"A door handle is one of the few parts of a building everyone touches. To make Mies' designs feel more tangible, we wanted to make an object that would convey the experience of being in the tower."

Working with ironmongery designer Ize, a limited run of 100 Roman travertine ashtrays were reproduced from the original, while the same number of door handle paperweights were recreated from a photograph taken in 1984.

The door handles will be commercially available from Ize at the end of April 2018.

Although Self is certain that both designs are by Mies van der Rohe there were no records of the ashtray nor door door handle in his office, which has allowed REAL to recreate the pieces.

"They exist in a kind of copyright grey zone, where we can't prove they are official, but we know that they are," said Self. "Because of how little information is available, REAL hasn't copied the designs but had to recreate them."

"We know Mies designed the handle and ashtray because he mentioned them in a letter to Palumbo, and they were included in a 1968 exhibition by Mies," he explained. "But there are no drawings or records from the office."

Mies in London is edited by Jack Self and Yulia Rudenko, and designed by OK-RM.