Milan 2016: London design studio Raw Edges has created a collection of zigzag-patterned furniture using pieces of wood that have been dipped into angled buckets of dye (+ slideshow).

The studio, led by designers Shay Alkalay and Yael Mer, created the Herringbone collection of tables, chairs and a screen by staining planks of untreated jelutong and pine wood in buckets of colourful dyes, each placed at a 45 degree angle.

The result is a multi-layered, multicoloured pattern – while the dye does soak through into the top layer of the wood, the grains and textures remain visible.

"We are more interested in creating patterns,  not just by sketching them, more by creating a system and a method of making them," Mer told Dezeen. 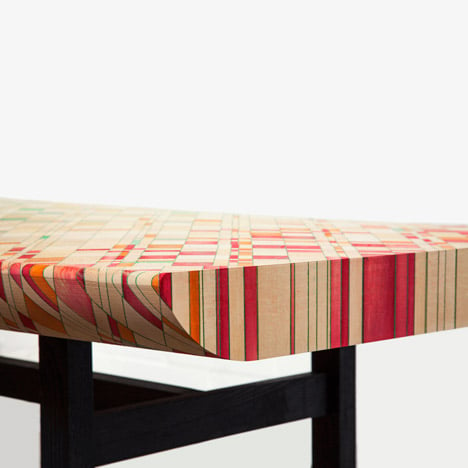 "In this case we came up with this method of dipping at 45 degrees," she continued. "So we start with very pale colours, then we dip the plank in one side and then flip it to the other side, and this is how we produce the herringbone pattern."

Raw Edges has worked on various projects that experiment with staining, and last year installed a dye-soaked wooden floor across the sculpture gallery at English stately home Chatsworth House.

At the press preview of their collection during this year's Milan design week, Mer told Dezeen that the duo are "devoted" to working with pattern and colours, and that this collection is a continuation of that previous dye-soaking project, called End Grain.

"For a very long time we were interested in colours and in patterns, but it took us time to declare it," said Mer. "But once we decided that we were going to devote ourselves to colours, it made it much easier."

"In a way, it is a continuation of a project called End Grain, but this is a much more lighter process. It's a few seconds of dipping, the previous one was like three days of soaking and cooking," she added.

Raw Edge's Herringbone collection is on show from 12 to 17 April at the Spazio Sanremo in Milan's 5vie design district.

Other projects on show throughout the duration of Milan design week include a collection of "intentionally boring" office furniture, a range of plastic furniture designed specifically for kids, and a table made from resin composite material Jesmonite.