American designer Stephen Burks explains how he collaborated with Bolon and BD Barcelona Design to create a textural furniture collection, in the latest movie in our Bolon at Heart video series.

The range is unveiled for the first time this week at the Salone del Mobile furniture fair, as part of Milan design week 2018.

"We're experimenting with the Bolon material for different parts of the upholstery," explains Burks in the movie.

"The concept evolved from a desire that we had to have some physical treatment of the skin of the chair. I wanted to get at something that was very organic, and something that related to the surface of the skin."

Together with Bolon, Burks has designed a new range of textiles to upholster elements of the pieces in the Grasso collection. One of these combines Bolon's woven vinyl material with strands of space-dyed yarn wool, which form horizontal floats that stretch across the upholstery.

"I'll be cutting the floats by hand," Burks states in the interview.

When cut, the floats dangle from the pieces, giving them a hairy appearance.

The material features on the back and sides of a leather lounge chair – the primary piece of the collection – as well as on the underside of an accompanying footstool.

"The footstool looks like a little creature that you can put your feet up on," explains Burks. "The cushion looks like it’s been forced through the frame and it’s pushing out on both sides."

Also included in the collection is a barstool, upholstered in another variation of Bolon's material. This was also designed in collaboration with Burks.

Burks – one of the judges in the inaugural Dezeen Awards – is known for his hands-on approach to design.

"For us as designers, the closer our hands get to the act of making, the more opportunity there is for innovation," he claims. "Bolon are experimental by nature, so we got to really play with it and see where we could go."

The project is the latest in a series of collaborations between Bolon and designers and architects, to experiment with uses for the brand's materials outside of flooring.

"We always wanted to challenge ourselves and to push the boundaries in production, in materials and in design," claims Helen Emanuelsson, chief business development officer at Bolon, in our video interview.

"Both BD and Stephen Burks fit so well into this collaboration because they are bold and very forward thinking," she explains.

Bolon previously collaborated with BD Barcelona Design when its materials were used to upholster a chair designed by Swedish duo Färg & Blanche.

"We love working with Bolon," says Jordi Arnau, general manager at BD Barcelona Design, who als o spoke to Dezeen for this film. "They are one of the most innovative companies right now in Europe."

According to Arnau, Bolon has outgrown its previous status as a manufacturer of flooring. "They have converted the company from a product-oriented company into a design-oriented company," he claims. 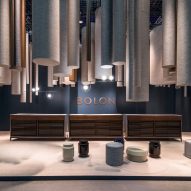 BD Barcelona Design is presenting Grasso as a conceptual collection at the Salone del Mobile, but the brand hopes to continue the collaboration in the future. "Right now this project is in an experimental phase, but we would love to put all these pieces into production very soon," claims Arnau.

Visitors to the Salone in Milan will be able to see the pieces at BD Barcelona Design's stand at the fair.

This movie was filmed by Dezeen for Bolon in Barcelona. It is part 10 in a 12-part series exploring Bolon's history, design and technology.

Music is by Tobias Lindén of Fry Communications.