London studio TDO has teamed up with architect and television presenter George Clarke to build a terrace of prefabricated houses in North Shields, England.

Called Fab Houses, the modular homes were designed by TDO and Clarke for joint venture developers Places for People and Urban Splash

The developers are currently overseeing the renewal of Smith's Dock – a former shipyard that has been dormant for 30 years and is now being transformed into an urban neighbourhood.

Manchester-based Urban Splash is known for working with architects to create diverse properties for sale and rent. Included in its portfolio are factory-built housing units, which are customisable and can combine to form terraces or large apartment blocks.

Liverpool-based architecture studio ShedKM was behind the developer's first attempt to explore how off-site fabrication could help to deliver affordable and customisable housing solutions.

The terrace of ten Fab Houses is part of a masterplan including a crescent of 24 townhouses, alongside an 80-unit apartment building designed by London- and Manchester-based architecture office SimpsonHaugh, which is still under construction.

Clarke – who is behind several successful television series including The Home Show and George Clarke's Amazing Spaces – was keen to be involved in the project because he is passionate about architecture's ability to enrich people's lives.

Clarke collaborated with TDO to develop the proposal for a special edition of the original concept, which incorporates features identified by the team as important for contemporary lifestyles.

"Fab House is a really good quality, elegant family home," said Clarke in a promotional video produced for the project.

"It's the fruition of 15 years of thinking about prefabricated homes and how we might build new homes in Britain in a very different way – quicker, easier, more efficiently, but more importantly to a better standard, that people are going to really love." 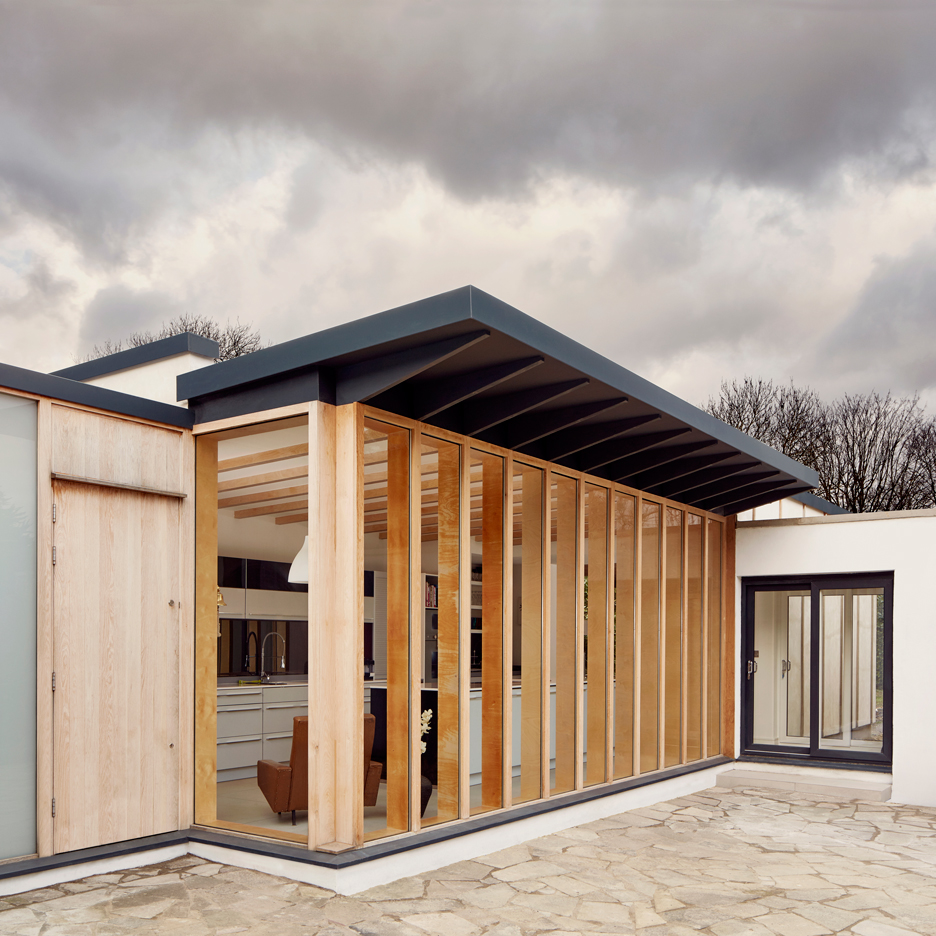 The prefabricated construction method – developed in collaboration with off-site contractor SIG – involves manufacturing modules in a controlled environment that reduces the time required for construction and ensures consistent quality.

TDO director Tom Lewith claimed, "modular construction has a vital role to play in reaching housebuilding targets, and as a young practice we're excited to be part of this."

The building features a series of pared-back living spaces where extraneous details have been stripped away to create rooms that celebrate structural elements and present a range of honest materials and finishes.

Timber joists in the modular cassettes of the floor plates are left exposed to increase the floor-to-ceiling heights and create material continuity with the birch-faced plywood staircase.

The stairwell projects into the open-plan living area and is illuminated by a skylight. Full-height windows lining the reception space and master bedroom above ensure these rooms are naturally bright and feel as spacious as possible.

"We've tried to build a good-sized house," Clarke added. "It's not oversized because it needs to be affordable. We're trying to use all the tricks we know as architects to make that space feel bigger: high ceilings, tall full-height windows, flooding the space with as much natural light as we can."

The exteriors feature grey fibre-cement cladding that creates a homogenous surface to unite the terrace. The architects chose to align the cladding vertically to increase the tolerances and make it easier for the contractor to install.

The grey Equitone cladding contrasts with the more tactile weathered steel used for the window reveals and projecting porches, which was chosen to reference the site's industrial heritage.

Prefabrication is increasingly being considered for the construction of houses. Artist Bobby Niven and architect Iain MacLeod recently created a prefabricated cabin that can be transported to site by truck, while earlier this year a flat-pack home that can be assembled in six hours was unveiled in Italy.