Architect Ariel Claudet has introduced a network of copper pipes to an otherwise simple studio apartment in Paris, to help it stand out on Airbnb.

Shakers Studio is located in Saint-Germain-de-Prés, near the Seine, in a 17th-century building that was once home to Eiffel Tower architect Gustave Eiffel and geographer Elisée Reclus.

After struggling to meet the rising rent for the historic property, the owner – a retired sociologist – decided to make it available for short-term lease through online platforms including Airbnb.

But he was worried that it wouldn't stand out against the competition, so he approached local architect Ariel Claudet to carry out a refurbishment of the compact 22-square-metre space. He asked that the interiors be kept largely neutral but feature some sort of unusual detailing.

Claudet suggested running a series of copper pipes along all of the studio's walls.

As well as concealing the home's electrical cables, the pipes can be used for hanging up ornaments, household items and other items. They can also easily negotiate the property's uneven surfaces.

The idea is based on the traditional peg rail – a hanging system developed by the Shakers, where simple hooks are attached to lengths of wood. This system allows clothing, tools and lightweight chairs to be hung up when not in use.

"I did not try to replicate their system literally, but abstracted the essence of the idea," explained Claudet.

Founded in England in the 18th century, the Shakers are a religious sect recognised for their ascetic lifestyles, and matching minimalist attitude towards interior design and furnishings.

Their pared-back aesthetic continues to be a point of reference for designers – Pinch based its Rodan coffee table on the appearance of Shaker storage boxes, while Gabriel Tan created a three-legged stool inspired by traditional Shaker designs.

Claudet chose to use copper rather than wood, as these pipes are easy and cheap to source. He asked construction workers not to wear protective gloves during the installation, so that their fingerprints would give the copper a naturally aged patina. 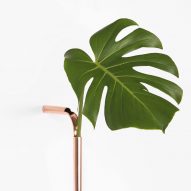 "As a standard plumbing material, copper pipes and fittings are very easy to find, handle and install," he said.

"Owing to its colour and conductance property, copper is also the warmest of all metals. Most remarkably, copper has the poetic quality of showing off its history when it ages."

The arrangement of the copper piping was drawn up on site so that the architect could work around the home's various quirks.

"The kitchen space stands as a good example: next to the sink, the horizontal tube has to descend vertically and divide into two smaller parts for the bathroom and kitchen light switches," Claudet added.

The rest of the apartment is painted white and decorated with a handful of monochromatic artworks made by Claudet.

Bare light bulbs feature at several points along the copper pipes, to illuminate key areas such as mirrors.