The lamp that Moustache created for French national railway service SNCF is now available to buy and, to mark the occasion, the Parisian design brand has released a series of movies featuring huge furry characters.

It was first developed for the passenger cars of the SNCF's TGV L'Océane trains designed by Saguez & Partners. Launched in 2016, the L'Océane trains connect the capital to Toulouse and Bordeaux.

Moustache has now adapted the light for domestic use. The new version was presented for the first time at Spazio Rossana Orlandi during Milan design week, which took place from 17 to 22 April 2018.

The brand claims it is the first object created for a French train that has been made available for use in the home.

The product has a narrow cylindrical base which forms a T-shape with two rounded light diffusers on either side. 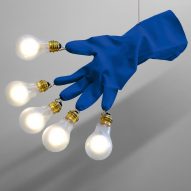 It features an aluminium body that is available in red, blue, khaki, white and anthracite, and has a screwing system under the base to fasten securely it in surfaces. This allows it to be used in non-domestic settings such as for restaurants, hotels and public spaces.

According to Moustache, the light "combines contoured lines with geometric rationality".

"It's a really interesting project as we had the chance to work with Alstom, a supplier for the TGV in France, so the techniques we used to make the lamps are crazy," Moustache co-founder Stéphane Arriubergé told Dezeen.

"They are made from injected aluminium – a process that is totally unusual for a furniture and lighting producer, and is more typically used in the aviation industry."

Moustache produced a series of three short films to accompany the launch, featuring a pair of furry characters

To accompany the launch of the lamp, Moustache produced a series of three short films shot by Michel Giesbrecht. The films feature a pair of furry characters with large eyes using the lamp in in various everyday environments.

"We designed the characters and their outfits."

Moustache first launched during Milan design week in 2009. It often works with French designers, with other recent launches including puffed-up plates designed by Constance Guisset and visor-inspired wall lamps by Jean-Baptiste Fastrez.

It previously worked with Ionna Vautrin on a "breathing" installation presented in 2014.