The simple Solo Vases each hold one leaf or flower within thin metal tubes. "The Solo Vase is a proposal to bring nature into the home in a delicate and unconventional way," said Wentz.

The vessels come in two versions. The first stands vertically and reaches one metre in height. At the top, it curves 90 degrees so the end can rest flush against a wall.

An opening at the bend allows the plant stems to be hidden inside the tube. A custom steel element that affixes to the wall helps to hold the copper tube upright, slotting into the perpendicular end.

This can be released with a light movement when water needs to be added.

"The copper vase rests between the floor and the wall, and the curve detail is executed from a cut in the tube – a technique inspired by the work with cane and bamboo," Wentz said.

The second vase is designed for a table or similar horizontal surface. Its longer portion forms an acute angle with the flat plane, with one end sliced so it appears to be disappearing into the surface.

The other end is bent over to provide support, with the peak of the curve open at the top for sliding the stalk into.

Both vases are coated with a transparent varnish to prevent the copper from oxidising and turning green. They are cut and curved by hand.

Wentz's products are available from select design galleries and boutiques in Brazil and the US.

He set up his studio in São Paulo in 2014, and launched his own brand Wentz two years later. The designer recently collaborated with Mexican studio Ad Hoc on a pair of freestanding mirrors, presented at the Inédito exhibition during Design Week Mexico in October 2017. 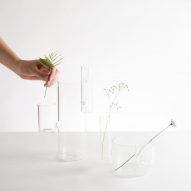