Architect Asif Khan installed a grid of red-stained timber columns in the courtyard of Milan's Palazzo Litta, to create a place of refuge for visitors to this year's Milan design week.

Called Tempietto nel Bosco, meaning Temple in the Forest, the week-long installation was designed to replicate a forest with a clearing at its centre. Khan's aim was to create a place where visitors could relax, while looking up at the sky.

The construction involved combining pairs of timber planks, forming columns that were V-shaped in plan. This created a more stable structure, making it possible to have very tall columns without additional support.

The columns were inserted into the ground, in line with the stone columns that run around all four sides of the palazzo's square open-air courtyard.

Together, the timber columns formed a rectilinear matrix of interconnected rooms and corridors. But at its centre was a round clearing, which was used for talks and events throughout the design week.

"This wooden pavilion is imagined as something between a forest and an open-air cathedral," Khan to Dezeen. "It is in dialogue with the palazzo's original design, which was created by architect Francesco Maria Richini in 1648."

"We used the order of the palazzo's original renaissance grid plan to make a series of columns in the centre of the courtyard, and within each of these spaces there are a series of 49 rooms marked out by the timber columns," he added.

"We wanted to create a moment of pause."

Hammocks by Italian brand Living Divani were strung up in between columns, while a marble surface was embedded into the central clearing space.

The rest of the flooring was provided by Belgian stone company Van Den Weghe. It featured a parquet motif, borrowed from the timber parquet within the palazzo, and was supported beneath by a raised flooring system by Eterno Ivica.

According to Khan, these natural materials were intended to reference the floor surfaces of the palazzo, while the red columns were designed to create an environment akin to Mars.

"We tried to create a new nature by using different materials, such as timber, marble and pumice stone underfoot, which is in contrast to the hard city pavements," Khan explained. 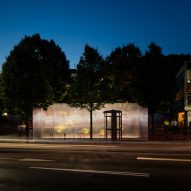 "As well as looking to the past, you'll notice that the timber is a deep red colour, and that's actually about talking to the future," he added. "So while the palazzo is the old world, the red timber columns reference the planet Mars and the new world."

"This is an idea of the landscape of the red planet superimposed into the context of a palazzo."

Khan, who founded his architecture practice in 2007, is one of the judges for the inaugural Dezeen Awards.

His studio often creates small-scale pavilion and installation designs, with past examples including a Summer House for London's Serpentine Gallery, the UK Pavilion for the Astana Expo 2017 and a "super-black" pavilion for the Pyeongchang Winter Olympic Games.

He is the fourth architect invited to create an installation in the grand courtyard at Palazzo Litta during Milan design week, following Marcio Kogan in 2015, Diébédo Francis Kéré in 2016 and Diller Scofidio + Renfro in 2017.

Photography is by Luke Hayes by Laurian Ghinitoiu.