Ford has developed a "new haptic visual language" that allows blind people to experience the view through a car window.

The Feel the View smart window captures an image of the surrounding scenery and translates it into vibrations on a tactile display that a passenger can explore through touch.

A video released by the car brand describes the technology as "allowing passengers to touch the scene and rebuild in their mind the landscape in front of them".

Feel the View came out of a brainstorming session run by Ford of Italy with local start-ups. Ford embraced the idea and financed a prototype, which was developed by creative agency GTB Roma and Aedo Project, a start-up focused on making devices for the visually impaired.

The window boasts a built-in camera that, at the push of a button, photographs the view beyond it. The photo is turned into a high-contrast greyscale image and reproduced through small LEDs embedded in the glass.

While this reproduction is invisible to the naked eye, the LEDs provide haptic feedback, vibrating at different intensities corresponding to different shades of grey — the whiter the colour under your fingertips, the greater the intensity of vibration. There are 255 levels of vibration available.

In addition, the smart window comes with a voice assistant that, through the car's audio system, provides contextual information about the surrounding view.

"We seek to make people's lives better and this was a fantastic opportunity to help blind passengers experience a great aspect of driving," said Marco Alù Saffi, spokesperson for Ford of Italy. "The technology is advanced, but the concept is simple — and could turn mundane journeys into truly memorable ones." 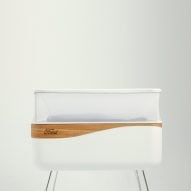 Feel the View joins a growing field of new designs that harness technology to give people with visual impairments more ways to "see" the world around them.

The field is of particular interest to car makers, who, with the dawn of autonomous vehicles, could soon be designing products for people who have previously been excluded from driving due to disabilities.

The haptic feedback system used in Feel the View also has potentially wider applications beyond cars, with GTB Rome describing the concept as a new language.

"As the prototype started taking shape, we realised we were giving birth to a complete new language that would give visually impaired people a new chance to visualise and experience traveling like never before," executive creative director of GTB Rome Federico Russo told Ad Week.

"An innovation that today is designed to use in a car, but that tomorrow could be implemented in schools and institutions for blind people as a tool that could be used in multiple ways."