UK prime minister Theresa May has highlighted the importance of creativity to the nation on a day when over 100 leading artists claimed government policies were putting the creative industries at risk.

May spoke at a reception for the creative industries held at her 10 Downing Street residence yesterday, praising "not just the stars", but also the technicians, designers and other "unsung heroes" who together generate over £90 billion for the UK economy each year.

"Your work is a vital part of our national life and our national economy, and I am absolutely committed to supporting it," she said.

She pointed out that creativity brings benefits to national life beyond economic impact. "The value of culture and creativity lies not only in its economic strength," she said. "Just as important is the less tangible contribution that it makes to our national life."

"The work you do brings joy to millions," she told the audience, which included a smattering of figures from architecture and design including Thomas Heatherwick, V&A director Tristram Hunt and Dezeen founder Marcus Fairs.

"It fosters unity, gives us a common currency," she said in her first speech about the creative sector and the first creative industries reception at 10 Downing Street under May's premiership. "It helps to define and build our sense of national character."

She paraphrased French philosopher Albert Camus, saying: "Without culture, society is but a jungle".

However the speech came hours after dozens of artists, including Anish Kapoor, Tracey Emin, Anthony Gormley, David Shrigley, Ben Langlands and Nikki Bell, wrote a letter to The Guardian attacking May's government for overseeing a decline in arts education. 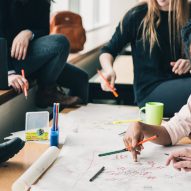 "We are writing to express our grave concern about the exclusion of arts and creative subjects from the new English baccalaureate, or EBacc, for secondary school children, which we believe will seriously damage the future of many young people in this country," the artists wrote.

"There is compelling evidence that the study of creative subjects is in decline in state schools and that entries to arts and creative subjects have fallen to their lowest level in a decade," continued the artists.

"Young people are being deprived of opportunities for personal development in the fields of self-expression, sociability, imagination and creativity."

The creative sector generates £92 billion a year for the UK economy and employs over two million people.

"That is bigger than oil, gas, life sciences, automotive and aeronautics combined," the artists pointed out.

In her speech, May praised UK architects filmmaker and fashion designers: "While our films captivate audiences the world over, our fashion designers surprise and delight, our architects are shaping skylines and cityscapes on every continent," she said.

"In publishing, in music, in advertising and more, the UK consistently punches well above its weight. And every day our creative industries fly the flag for Britain on the global stage."

She also highlighted the work of lesser-known creative-industry workers. "I am not just talking about the big names, the stars of stage and screen who we all recognise, the sector provides highly skilled jobs right across the board," her speech continued.

"Technicians, producers, researchers, designers, coders, set builders, make-up artists… The unsung heroes, the people without whom our creative industries would not be the worldwide success that they are." 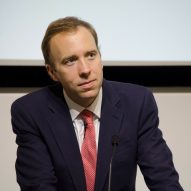 London creatives moving to Milan? "It's my job to stop that from happening" says Matt Hancock

The Conservative government's introduction of the EBacc curriculum, which favours technical subjects such as science and maths, has been blamed for driving the numbers of students taking arts exams to their lowest levels in ten years.

In an interview with Dezeen last month, culture secretary Matt Hancock defended the government's record in supporting architecture and design and called for a balanced approach to education, with schools offering both academic and creative subjects.

He told Dezeen that UK needed "a rigorous education [system] that teaches people both the core skills that you've always needed, like English and maths, and also how to have an inquiring and creative mind."

In the interview Hancock, who was at the 10 Downing Street event, said that architecture and design "are about putting our stamp on the world," adding that "we should shout that from the rooftops."

Dezeen's 2016 Brexit Design Manifesto called on the government to recognise the value of architecture and design to the UK economy and culture, and to the nation's global reputation.