Platov airport in Rostov-on-Don, designed by Twelve Architects, has completed ahead of the FIFA World Cup 2018, when the city will be hosting games.

The London-based architects designed the terminal, which will see five million passengers travel through it each year, for the Renova Group, Russia's largest airport holding company.

Twelve Architects masterplanned the entire site, which includes a new international and domestic terminal and a hotel. This infrastructure will prove vital when the 2018 FIFA World Cup kicks off, with the city hosting its first game on June 17.

Platov airport's defining feature is it's striking roof, formed of a series of arches. According to Twelve Architects, the design is a metaphor for how the airport is a "sky-bridge", connecting cities and countries. The building is laid out on a grid, so that additional arches can easily be added to expand the airport in the future. 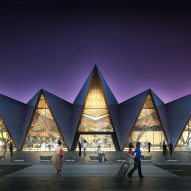 Three of the arches extend beyond the main terminal building, signposting routes for travellers on their way to arrivals and departures, and providing covered zones for pick up and drop off points.

Inside the terminal, the roof arches and an eight-metre-wide skylight visually divide the space, denoting the international and national travel zones. White supporting struts split from a central column, zig-zagging through the terminal.

A landscaped water feature that connects the terminal with the train station, car park and hotel is a reference to the River Don, which flows through the city.

Twelve Architects recently revealed their designs for another airport project in Siberia, which will feature a tented roof.

Nike has designed kits for several of the competing teams, including England and Nigeria kits that blend elements from old strips with modern silhouettes, and kit for Brazil that uses the colours worn by their team when it won in the 1970s.