This minimalist residence outside São Paulo by Studio MK27 offers residents a variety of enclosed and open spaces underneath an imposing concrete roof covered in grass.

Completed in February 2018, the longitudinal residence is named Planar House after the expansive surface that defines the roof.

"Planar House is a radical exercise in horizontality, an aspect commonly explored in the projects of the studio," said locally based Studio MK27 in a project description.

In some areas, the thick slab rests directly on a grid of cruciform columns, while in others it sits on bearing walls. However, there are no visible supporting beams throughout the house.

"This type of insertion on the plot demanded care and attention with the design of the rooftop, which is the fifth facade of the building," said the architects.

The main entrance to the home from the north, on the narrow side of the long rectangular plan. An opening in a curved, made from spaced-apart bricks, leads to an entrance garden.

Inside, two volumes make up the programmed spaces of the 1,000-square-metre residence. Both are oriented north-south and run parallel to one another.

The first contains service spaces such as a playroom for children, the kitchen, and a home gym. The other is made up of five bedroom suites, laid out in a single row facing the sloped landscape. 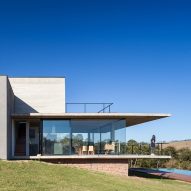 "The living rooms are located at the extremities and can be completely opened or closed by sliding glass doors, transforming the entire house into a terrace," said Studio MK27.

A brick wall, which is sometimes concave and sometimes convex, snakes through the building and contrasts with the otherwise orthogonal layout.

"Surrounding the rigid formal distribution, there is a vertical winding wall made of bricks arranged in solids and voids," the studio said. "Paradoxically, it defines the different relationships between the internal and external spaces."

At the southern end of the residence, a few steps lead from the living room down to a pool. The interiors feature a limited material palette that includes wood and concrete.

The firm, led by Brazilian architect Marcio Kogan, has completed a multitude of projects around the world. They include a lush property in Miami with its own lagoon and a residence in Brasília that draws inspiration from the city's modernist heritage. 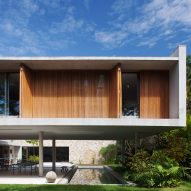