Los Angeles-based Studio Unltd has used influences from Morocco to Turkey for the interiors of this Middle Eastern restaurant in the city's Arts District.

Located in a former warehouse, Bavel was designed by Studio Unltd and restaurant chef Genevieve Gergis with modest, light interiors alongside old-world accents. The goal was to pay tribute to the past industrial life of the space, as well as reference the heritage of the cuisine.

"Middle Eastern restaurants are often imagined to have design aesthetics that tend to be very dark, heavily patterned and somewhat cliché," said Gergis. "With family roots in Israel, Morocco, Turkey, and Egypt, chefs Ori Menashe and Genevieve Gergis wanted to open a restaurant that showcases the cuisine from their family lineage."

The design for the restaurant, which opened in April 2018, highlights original elements of the space with white-washed walls and wood furnishings to complement the old warehouse.

"The interior brick walls have been treated with a wash, which evokes the textures of ancient Middle Eastern seaside villages; where wall materials show the age of centuries of different treatments depicting its evolution," said the chef.

A central dining area is defined by high ceilings with sawtooth-like skylights and exposed ductwork. Plants drape down from the ceiling, helping to soften the space and dampen acoustics. The greenery is back-lit in the evenings, giving perimeter walls a pattern reminiscent of Moroccan latticework.

A series of curved wooden benches form intimate seating areas, and are decorated with mustard yellow cushions that tie in with the dark wood and rattan dining chairs.

"The dining patio found its muse in the structural oddities found in the Middle East," said the chef. "It features several different materials, textures and features creating a 'mash-up' of sorts of style through time embracing the evolution of a space."

At the centre of the restaurant are two long, upholstered benches, with dark back cushions patterned by geometric golden details and seats in caramel leather.

"Patterns evoking a Moorish feel are seen sporadically throughout the space, from the flooring details and counter faces of the dining room to the restroom lanterns," said Gergis. 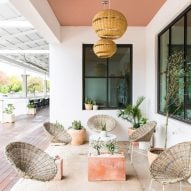 Hints of colour come in the form of metallic pink chairs that line the bar, and shelves in gold and turquoise behind. "The colours are also drawn from Casablanca, with vibrant turquoise, saffron and turmeric as well as brass highlights," Gergis said.

Concrete lines the ground, interspersed with stripes of orange, light blue and white tiles. A glass front door is accented with sky blue, and a half-wall near the bar is covered in wooden boards.

The walls and ceilings of the restaurant are a stark white, providing a neutral base for the black and wood furnishings.

This juxtaposition of industrial and natural, with splashes of colour and foliage, is common design trend in restaurant interiors. Examples of similar spaces include Hank's in Austin, Texas with "minimalist desert modern" decor, a restaurant in Chicago with contemporary spindled chairs by Parts and Labor, and the rustic white and wooden palette of De Maria in New York City by The MP Shift.

Bavel can be found at 500 Mateo Street, Los Angeles, and is open for dinner Tuesday to Sunday.

Photography is by Dylan and Jeni.