IKEA has teamed up with Swedish tech creatives Teenage Engineering to design a set of mobile speakers and lights that make it easy to throw a party in any location.

The Frekvens system features a range of modular components that can be combined in different configurations, to create a stack of lighting and speakers. Each component is small and cube-shaped, making them easy to transport.

Lighting elements include spotlights, as well as more creative designs that incorporate patterns and effects. The speakers are designed to match, and come in shades of red, yellow and black.

IKEA describes it as "a portable music collection perfect for spontaneous sprees".

"It's a playful collection that you easily scale up or down to suit your needs," said IKEA's Michael Nikolic, who was the creative lead for the project.

"Apart from looking super nice, it sounds great – so it's definitely the perfect reason to throw a party."

Teenage Engineering is a Stockholm-based collective of designers, engineers and computer programmers that specialise in audio equipment.

This is the first product the group has created with IKEA, although they previously performed interactive synth shows at the homeware giant's huge Milan exhibition in 2017, IKEA Festival, which featured in a series of broadcasts on Dezeen. 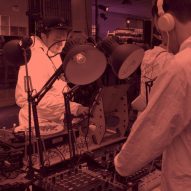 As well as the sound and lighting, Teenage Engineering suggested that it is creating additional items for the Frekvens range.

"Imagine that you can buy the candles, napkins, speakers, light system… it's a complete party from IKEA," said Jesper Kuouthoofd, who is one of the co-founders of Teenage Engineering.

"We've wanted to make something that feels like IKEA, and at the same time challenge how we perceive them today," he said. "It's exciting to explore new territories, push the boundaries and challenge each other. IKEA is furniture, meatballs and soon… party!"

Frekvens is set to be on sale in stores in July 2019, for a limited time only.

It is one of several new designs announced by IKEA, which ranked as the most newsworthy force in design on Dezeen Hotlist 2017, at its Democratic Design Days – an annual conference held in Älmhult, Sweden.

Also at the event, the brand revealed products produced in collaboration with Virgil Abloh, a maximalist design collection by Swedish artist Per B Sundberg and a collection of furniture based on life in outer space.

It also announced another audio design – a range of speakers produced with Sonos.