IKEA has revealed another new product in its hotly anticipated range with fashion designer Virgil Abloh, a rug that looks like a huge shopping receipt.

During IKEA's annual conference today, the brand revealed the first official photos for the upcoming Markerad collection, which has been in the works for over a year and is aimed at millennials.

The images unveiled at the event, called Democratic Design Days, show three products. The first two – a glass cabinet and triangular red doorstop – were both revealed during a preview video broadcast from New York last month. But this is the first time the receipt rug has been shown.

"Virgil has a fantastic ability to work with essential functions and basic materials and create something new," said IKEA's Henrik Most, who is working with Abloh as the creative lead for the collection.

"Each Markerad item is both a design object and a piece with high artistic value," he said.

IKEA's brief to Abloh, founder of fashion label Off-White, was to develop a range of "first home must-haves" for students and other young people.

His approach has been to create pieces that are similar to traditional IKEA pieces, but feature subtle pop-art-inspired tweaks. 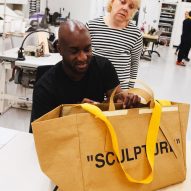 The red doorstop was first shown last month, slotted over the leg of a typical wooden chair.

"It's about elevating the anonymous, everyday icons that we use without noticing. When we put a doorstop on one of the legs of an ordinary chair we create something unexpected – an interruption," said Abloh.

The other piece presented at the conference was the glass cabinet described by Abloh as "a baroque Wunderkammer, a cabinet of curiosities".

Transparent on all sides, it features a wooden frame and a red handle in the shape of a nail. It is designed for showcasing personal items – the designer suggested it might be used for presenting a sneaker collection.

"I want each item to bring a sense of pride, and I want the great design to be the biggest reason why you get it," said Abloh.

The Markerad collection is due to hit stores in 2019. Other pieces in the range include slogan-covered rugs and Abloh's take on the IKEA Frakta bag.

The brand also revealed products including a portable party collection by Teenage Engineering, maximalist designs by Swedish artist Per B Sundberg and a range of furniture based on life in outer space.

Additionally, it showcased a new collection of rugs by various designers including Abloh, plus Craig Green and Noah Lyon.