White-painted wooden shapes are set beneath grey and yellow resin to give a gradient effect to this furniture by Brooklyn-based Facture Studio.

The pieces appear to be formed from different coloured blocks of resin, but this is actually an illusion. They were actually made by pouring a pigmented resin into a mould with a white-painted wooden volume in the centre.

This core is shaped in tiers so that, as the resin drys around it, layers of varying thicknesses are created. The depth of the resin dictates its colour and opacity, so each of the layers looks different.

"The wooden core is crafted and finished with the same attention to detail as the final resin surface because the interplay between it and the resin around it are essential," Ellis told Dezeen.

"The resin colour is specially formulated to these thicknesses to achieve different amounts of transparency and to ensure that parts of the core are obscured." 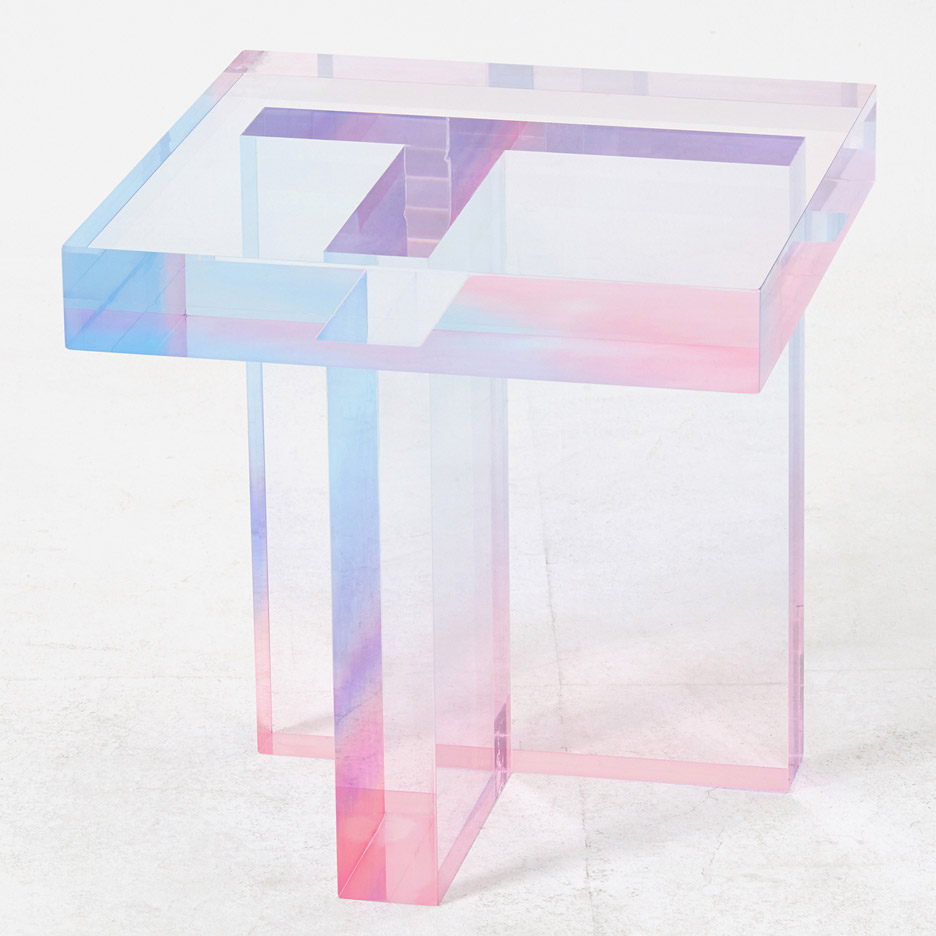 The Scale collection includes a console, a series of side tables, and a circular wall hanging, all in grey and yellow hues.

Facture Studio created different wooden cores for each piece, and employed a different method for setting the designs in order to suit the different shapes.

A yellow-hued resin covers rings of wood at the centre of the round decorative item, which was set in a circular mould on a flat surface.

The console, however, was left to dry on its side. "This insures the proper dimension of the resin can be seen and checked, and that the resin is flowing or poured in stages in the same orientation as the stripes," said Ellis.

Filled upright until the top is covered with resin, the side tables have varying finishes.

While a striped version follows the style of other items in the collection, the studio created different effects for the others by decorating the inner sides of the moulds. For example, one is covered with plaster chips. Once set, these fragments are suspended inside the furniture pieces.

Other side tables in the series include a design with pixellated decoration, formed from different-sized squares, and a plain version.

In the final stage, after removing the exterior moulds from the pieces, Facture Studio sands down each item to give a "buttery smooth" finish.

This latest collection was shown at ICFF from 20 to 23 May 2018, during the citywide NYCxDesign festival.

Another highlight from the furniture fair was the Collective Concept exhibition of 12 designers and studios, which featured see-saw lighting, striped stone vessels and a totemic alabaster lamp among its displays.