Engineering studio Close to Bone has announced plans to rebuild and enlarge the cantilevered viewing platform it built in Flanders, Belgium, which was severely damaged in an apparent explosion.

Vlooyberg Tower was the victim of an arson attack in the early hours of Friday 29 June, according to a report by Flemish public broadcaster VRT.

"The local police chief called me from my bed at 3am", Rudi Beeken, mayor of the Tielt-Winge municipality, told VRT. "His people were at the tower and found it was heavily damaged. There had been an explosion; apparently someone had detonated something at the bottom."

Close to Bone said it plans to not only rebuild the staircase, but to make it taller than before.

"We have had close contact with the major over the last few days and decided to rebuild/renovate the tower," said studio director Yves Willems.

The engineering studio completed Vlooyberg Tower in 2013. Standing at 11.5 metres high, the gravity-defying tower offered a view over rolling farmland and the Kabouterbos forest.

Made completely from weathering steel, it was designed to "be able to withstand the ravages of time". It was commissioned after its predecessor, a wooden viewpoint, was itself burnt down by vandals.

Unlike the timber viewpoint, Vlooyberg Tower was not irreparably damaged in the attack. According to Willems, the majority of its supporting structure was saved from highest temperatures and will be reusable. 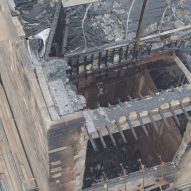 Following discussions with Beeken, Close to Bone plans to add completely repair the tower, with the cost covered by the structure's insurance.

The studio also plans to extend the tower with one additional section, which will raise the height by up to 2.1 metres. A crowdfunding campaign will be launched to cover the cost of this extension.

Since its completion, Vlooyberg Tower has become a prominent local landmark and tourist attraction. It also featured in Belgian television series Callboys.

According to Close to Bone, the production team and actors of the series have promised to promote the crowd-funding campaign.