US artist and designer Michael Jantzen has envisioned a non-denominational chapel in New Mexico, featuring a series of gabled frames that stretch up to the sky to represent its "openness to all".

The conceptual Chapel For New Mexico is imagined for a location near the US state's capital city Sante Fe, which the designer describes as a home to people involved in "a wide variety of spiritual endeavours". Rather than separating them by beliefs, the chapel would provide a sanctuary for all to gather.

"My hope as the designer of the Chapel For New Mexico is that its design will help to promote the idea of multiculturalism, inclusiveness, and tolerance," said Jantzen in a statement. 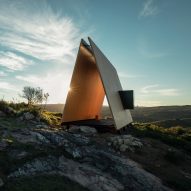 His design comprises a structure with four sides, each with a white-painted steel and concrete frame filled with glass. The frames are repeated seven times on each side to form layered walls that taper upwards and outwards, drawing on the ideas of inclusion.

"This configuration is symbolically referring to the chapel's openness to all who will hopefully be inspired by its uplifting geometry," said the designer, whose portfolio of work includes concepts for experimental housing, wind structures and bridges.

Surrounded by mountains, the chapel would be built on a square, white platform with a pair of steps running around the edge. Visitors would be able to access the chapel through glass doors placed on every side.

Inside, an elevated circular podium at the centre would be used by "a minister, priest, rabbi, or any other inspirational speaker".

Four large benches would be arranged around the pulpit at 45-degree angles to the walls, with two smaller versions set in the corners behind. The seating could accommodate up to 30 visitors for the "special ceremonies".

Additional features include the rooflight placed above the speaker's platform, and a circular chandelier that hangs from it.