The Nike boot that will be worn by players in the next European football season is designed to support a more attack-focused form of play.

With the World Cup now over, Nike unveiled its latest high-tech football boot yesterday. The PhantomVSN boot replaces the Magista, which was initially designed for the defence-focused midfielder position.

According to Nike Football's senior innovation designer Phil Woodman, the favoured style of play has changed in recent years to become more attack-orientated, and new equipment is needed to support this.

"The game is becoming a lot faster, where everything is all about attack, and everyone on the field has to have a role in attack," Woodman told Dezeen.

"So it's gone from being more of a position-based boot design to being based more on a mentality of attack," he continued.

"Players still have to collect and control the ball, but they're equally responsible to take the ball forwards and actually shoot and score goals. And we've seen a lot of that in this World Cup."

Woodman designed the boot from the inside out, focusing first on the newly developed Quadfit mesh inner that can adapt to fit almost any foot.

Making its debut on the PhantomVSN, the Quadfit material comprises thousands of minute cables that are woven in four axes.

Each weave can move independently, allowing the mesh to morph and separate to adapt to the unique shape of a player's foot, providing support in all directions.

The material is also designed to retain its shape, so can be massaged back into position after use.

This saves players the pain of having to break in their boots, says Woodman, as it means the PhantomVSNs are "match-ready right out of the box".

The boot also boasts an outer made from Nike's popular Flyknit material, which enables the players to slide their boots on "like a sock". 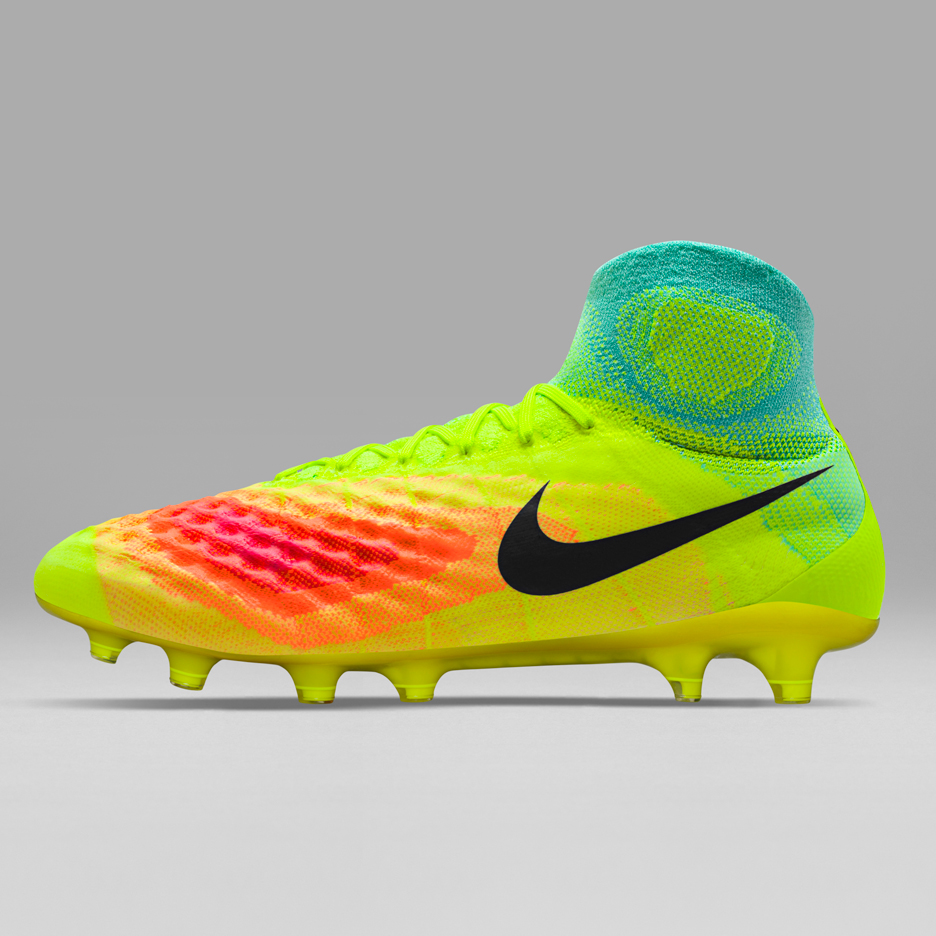 It doesn't appear to have any laces, but these are actually hidden underneath the Flyknit outer. Nike calls them ghost laces. This gives the foot an streamlined exterior, allowing players to interact with the ball using any part of their foot.

The sportswear brand carried out its research on ball control at the Nike Sport Research Lab in Oregon. The team analysed the actions leading up to the scoring of a goal, to see how players naturally interact with the ball.

Using foot-scanning and slow-motion technologies, they were able to see how the boot could be shaped to ensure optimal interaction with the ball.

As Woodman explained, the boot design is based on a triangular structure. Each point in the triangle covers three prominent bones in the foot: the calcaneus, talus, and first metatarsal head, which are all critical to ball control.

"When we think of the phantoms we are designing for, we envision a battler who has mastered the art of navigating tight spaces while possessing the vision for attack lanes others may not see," said Woodman.

"The phantoms would be at ease in a position-less environment and accustomed to multi-directional manoeuvres with the ball at their feet."

The PhantomVSN is available in both a studded and a non-studded version, and comes with a traction pattern to assist quick multi-directional cuts. Other features include NikeReact cushioning.

Nike was behind many of the team kits at the World Cup, including the one worn by champions France. Other recent innovations from the brand include running shoes with 3D-printed uppers.