Bennetts Associates and Allford Hall Monaghan Morris are both designing buildings in London's King's Cross to house the offices of tech giant Facebook.

The new Facebook headquarters will be spread across three buildings: 11 and 21 Canal Reach designed by Bennetts Associates, and P2 on Lewis Cubitt Square by Allford Hall Monaghan Morris (AHMM).

Combined the three offices will have 57,000 square metres of floor space, doubling Facebook's current footprint in the capital.

"We chose King's Cross because it has considerable expansion opportunities, great transportation access, and is part of a vibrant community," said Rob Cookson, head of global real estate at Facebook.

The social-media giant is the latest technology company to move to King's Cross, with Google also building a vast new headquarters on the site. AHMM originally designed a building for Google, before being replaced on the project by BIG and Heatherwick Studio.

AHMM's P2 was submitted for planning approval in June 2018. It is set to be built on a plot to the north of the Heatherwick-designed Coal Yards Drop shopping centre, which is currently under construction. 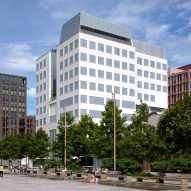 The nine-storey building will stand alongside the gas holders that were converted into luxury flats by Wilkinson Eyre and opposite Fumihiko Maki's Aga Khan Centre in the rapidly developing area.

As well as 18,000 square metres of office space, the building will contain a 600-seat theatre and 1,700 square metres of shops on the ground floor. It is designed to achieve a sustainability standard of BREEAM Excellent, with dedicated cycle access and parking spaces for 238 bikes.

Bennetts Associates has designed two adjoined buildings at 11 and 21 Canal Reach for the social-media company located around 100 metres from P2. Both of these buildings already have been granted planning permission.

Together, the two connected buildings form a curve to follow the line of the road and will be topped with a roof garden.

Facebook is expected to move into the offices in 2021.