UK studio Bennetts Associates has used cross-laminated timber and glulam to create the lightweight King's Cross Sports Hall, which is currently being used as the Construction Skills Centre.

Set alongside Coffey Architects' 22 Handyside Street office block, to the north of King's Cross station in London, the sports centre was built three metres above a railway tunnel.

Named the King's Cross Sports Hall, the building's main space is a double-height hall that can be used as four badminton courts, a basketball court, a volleyball court or a five-a-side football pitch.

Initially, however, this space forms part of the King's Cross Construction Skills Centre, which will use the building to provide construction training and apprenticeships while its permanent home is built in nearby Euston.

A gym and fitness suite, which are open to the public, are located on the upper floor.

Due to the location above three Thameslink railway tunnels, the building needed to be lightweight.

"We designed the building to be a community facility that is welcoming, as well as being flexible, sustainable and lightweight," said Bennetts Associates director Julian Lipscombe.

"The building floats on the Victorian rail tunnels serving King's Cross so it had to be as lightweight as possible," he told Dezeen. "CLT and glulam were the best solutions for this, as well as being very low carbon and allowing longer spans."

The sports centre's overall form, including the sawtooth profile of its roof, was derived from the underground constraints and the choice of material.

"CLT and glulam offer a simplicity of construction technique that we embraced," said Lipscombe. 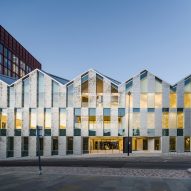 "The sawtooth mono pitches of the roof are a direct reflection of the long span beams in the sports hall that sit on cross walls spreading the load evenly onto the tunnels below," he continued.

"The engineering solution had to be incredibly lean and very finely balanced."

The building is clad in zinc as a nod to the industrial buildings that previously occupied the site.

"The roof form is not only an expression of the structural logic but also a contextual response to the Victorian railway sheds that used to occupy the site, with their intense rhythm of repeated elements," added Lipscombe.

"The dark zinc cladding allows a relatively small building to hold its own against larger neighbouring buildings."

Built as part of the redevelopment of the King's Cross, the sports hall stands next to the Coffey Architects office block that in turn sits beside the pink R7 building designed by Morris + Company. Fumihiko Maki's Aga Khan Centre completes the row of buildings.