Belgium's Venice Biennale pavilion is being used as a forum for debate about the future of Europe, in a bid to prevent the continent becoming further divided.

For the duration of the Venice Architecture Biennale, visitors are invited to take a seat within the bright blue amphitheatre that fills the building and consider the various issues facing the European Union – not only Brexit, but also the rising nationalism in countries including as Greece and Italy.

The curators – architecture trio Traumnovelle and fellow architect Roxane Le Grelle – see the space as a sanctuary where people can come to imagine "a new Europe". They call the project Eurotopie.

"I really don't want to imagine a Europe divided again, even if it's the direction being taken everywhere in Europe," said Jonny Leya, one third of Traumnovelle. "So let's try to be more involved."

Although Brussels is the capital of the EU, the curators claim that the European Quarter – where many of its institution are based – has little in the way of a transnational European identity. Brussels residents don't feel a close connection to it either, they suggest.

One of their biggest issues with the area is that it has no civic space, so they decided to build one in Venice.

"We decided to do something to be more involved in common projects, to try to find a way to make Europe more interesting," said Leya. "We need to build something for this Europe. And we are architects, so we are using architecture."

The round, tiered seating fills all the rooms of the pavilion, creating a space that references the agoras of Ancient Greece. It is painted in the same ultramarine blue colour as the flag of the European Union.

Visitors are asked to remove their shoes before climbing up onto the structure, via a doorway at the entrance to the space. 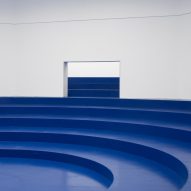 Once inside, they can clamber up and down the benches to different spaces, and peruse various pieces of art and narrative fiction gathered in book format for the project.

At the same time, a remixed version of the anthem of Europe – Friedrich Schiller's Ode to Joy, set to Beethoven's 9th Symphony – plays out through hidden speakers.

According to Leya, the circle of benches is meant to act as an informal parliament – a common space for visitors to come together. But it also has a second, more metaphorical layer of meaning.

The concept of this meta-nation, Eurotopie, is fleshed out in the book that is scattered around the space. Written by the philosopher Bruce Bégout, it imagines a new Europe that arises in Brussels after what Leya describes as "a war between nationalists and super-nationalists".

The book features a metallic silver cover emblazoned with the stars of the EU flag.

"We are using fiction as a tool to imagine new narratives for this optimised Europe," added Leya.

Leya and partners Léone Drapeaud and Manuel León Fanjul often use fiction as a tool in their projects. They describe themselves as a "militant faction".

This project offers a political twist on Freespace, the theme chosen by biennale directors Yvonne Farrell and Shelley McNamara, which invited participating architects to celebrate the spaces that architects give to the public for free.

They weren't the only participants to explore the future of Europe in their exhibition.

At the British Pavilion, Caruso St John and Marcus Taylor created an installation motivated by Brexit, which received a special mention from the directors.

Leaving the pavilion itself empty, they built a scaffold around it and a raised platform on top, then invited other countries to use it for their own events.