The G3 Vessels series comprises a circular, oblong and double-dish by Japanese designer Shinya Yoshida, who worked as a car mechanic prior to establishing his eponymous industrial design studio in 2012.

Good Thing launched the collection on 23 July 2018 to coincide with NYC Restaurant Week – an annual event that offers discounts at some of the city's hottest dining spots. Two restaurants partaking in the citywide event, Mission Chinese Food and Lalito, are serving up a "special restaurant week dish" in the vessels so that diners can "test drive" the products.

Yoshida took cues from the streamlined forms of the automobiles to create the collection. The resulting rounded shapes can hold small bites like nibbles, dips and crudites, and desserts. 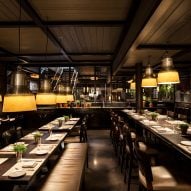 "Good Thing's new G3 Vessels employ subtle flowing compound curves native to the auto industry to create a satisfying and useful series of containers," said the studio in a statement.

Aside from dining, Good Thing intends the vessels to "be used creatively" for storing other items, such as stationary or jewellery.

Yoshida chose silicone for the containers so that they are easy to clean if used for food, and won't break if dropped. A variety of colours are also available for each, including a dark green, cream, rusty red, a "blue black" and "mint", to blend with a variety of interior styles.

The simple design of Yoshida's containers is in line with many past products by Good Thing, which was founded by Canadian designer Jamie Wolfond in 2014.

The brand focuses on creating everyday items for the home, with recent works including a minimal soap bar by Jasper Morrison and a collection of furniture aimed at those who live and work in the same place.

The G3 Vessels are being used for dishes on set menus at Lalito (104 Bayard Street) and Mission Chinese Food (171 East Broadway) for the duration of NYC Restaurant Week, which runs from 23 July to 17 August 2018.

Mission Chinese, whose executive chef Angela Dimayuga commissions ever-changing installations for the restaurant, was also included in Dezeen's pick of five eateries for those who appreciate both design and food during last year's event.