French practice Didier Faustino has offset pink marble walls with olive green furnishings to create a "neutral and sensual" aesthetic for this bar in Ghent, Belgium.

XYZ Lounge is part of Zebrastraat, a social housing development that also plays host to a selection of exhibition spaces and conference halls.

The site is overseen by the Liedts-Meesen foundation, whose chairman Alain Liedts approached Paris-based studio Didier Faustino to create a new drinks bar where residents can socialise.

"The [existing building] was outdated and Mr Liedts wanted us to design a contemporary space that is both deeply rooted in time and kind of out of time as well. He gave us carte blanche," Didier Fiúza Faustino, founder of the studio, told Dezeen.

Set with this open brief, the studio first went about rearranging the building's three main spaces to achieve a "new architectural balance".

The central room with a steeply pitched ceiling features a bar counter at its rear, while a large room has been dedicated to cocktail parties and comes complete with its own projection screen, and a side room leads directly onto a terrace.

A simple pink and green colour palette has been applied throughout the bar's interiors with the aim of creating a space that can't be pinned down to the style of a particular time period. 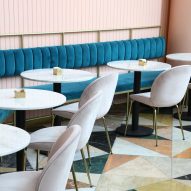 "[The colours] are very identifiable, but put together they tend to cancel each other out and give the space a sort of neutral feeling," said Faustino.

"During a time where social, sexual, and gender identities are upturned and questioned, how may one provide a space which is both neutral and sensual, a space free from social markers, without tailoring to a singular identity?" he added.

Blush-coloured sheets of metal have been used to encase several of the bar's surfaces, some of which are grooved and backlit by a concealed artificial lighting system.

Similar toned marble has then been used to craft chunky, Y-shaped tables and geometric panelling on the walls. Olive green fabric has also been used to crate curtain-like or diamond embossed feature walls.

Photography is by Felipe Ribon unless stated otherwise.