Melbourne studio Biasol combined marble surfaces with geometric elevations and pastel hues as a nod to Wes Anderson's film The Grand Budapest Hotel for this cafe in Chengdu, China.

The Budapest Cafe is located in the Chengdu, capital of China's Sichuan province, but its owners specifically chose an Australian design studio to create an environment that would appeal to an international audience.

Biasol, headed up by architect Jean-Pierre Biasol, looked to the "vivid and nostalgic colour palettes" seen in movies by American filmmaker Wes Anderson.

To achieve this, the designers chose to focus on materials that they described as feminine, which resulted in a palette of light-grey marble surfaces and speckled multi-coloured terrazzo plains, as well as pastel greens and pinks for the walls and furniture.

"Our design draws on filmmaker Wes Anderson's meticulous, memorable and magical worlds to create an inviting destination with whimsical character and international appeal," explained the designers.

"He tends towards one-point perspectives and peering down from above; gives attention to the edges of a set as much as the middle; and frames stories with proscenium arches," they continued.

To mimic the symmetry seen in Anderson's set designs, Biasol introduced a series of arches to frame the recessed seating areas and shelving units.

The centrepiece of the room is a terrazzo tiered seating area which includes a pink ball pit, white neon signage and an original Eero Aarnio Bubble chair.

Elsewhere, a staircase with a zig-zag bannister leads visitors to a mezzanine level, providing views of the cafe from above.

This zig-zag motif is echoed elsewhere in the cafe; from the detailing on the bar to the "staircase" wall extensions.  Greenery is also dotted about the space.

"Like Anderson, we create imagination and evocative spaces," said Biasol. "Our design for The Budapest Cafe has a relaxed and indulgent atmosphere; a whimsical and elegant aesthetic; and a hospitality experience infused with Melbourne's cafe culture."

Biasol was founded by Jean-Pierre Biasol in 2012. The multi-disciplinary studio works across interior, product and branding design, and has completed projects in London and Melbourne – including an art-deco warehouse in Melbourne and a pale concrete cafe called No 19.

Photography is by James Morgan. 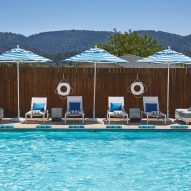