French practice Atelier Sagitta has added a dose of colour to this previously characterless apartment in the Paris suburbs by creating an almost entirely green kitchen.

The apartment is set inside a recently-built residential development in the Clichy-Batignolles neighbourhood, in the north-west of the city.

Its owner – a young art director who works in the music industry – had bought the property as a largely empty shell, so approached local architects Atelier Sagitta to "bring a touch of originality" to the kitchen area which sits at the centre of the floor plan.

He specified that the architects should also incorporate a dining table in the kitchen in order to free up space in the adjacent living area.

With this in mind, the architects decided to paint the kitchen cabinetry, ceiling, and peripheral walls a bold shade of emerald green, mimicking the colour of the original laminate countertop that had been in the apartment upon purchase.

The architect had also been loosely influenced by an apartment they previously renovated in Paris' 17th arrondissement, which featured a forest green cooking area.

A pair of grooved oakwood volumes that contain extra cupboards have been inserted on one side of the kitchen, which were crafted by the client's long-term friend and cabinet maker Michel Mazué. These form an L-shaped layout, allowing room for a round table and two chairs – the stool seats have been completed in a slate grey to match the colour of the kitchen's floor tiles. 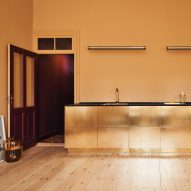 A small shelving unit connects the two volumes, offering the inhabitant a convenient spot to place his keys and other personal items when entering the apartment.

"Its identity and form create a sweet relationship between spaces, and brings a character to the rooms," said the practice in a statement.

Atelier Sagitta are among a handful of practices and designers to create vibrant colour-block kitchens for clients – earlier this year Reform hacked standard IKEA cabinets to form an all-gold kitchen for the Copenhagen headquarters of fashion label Stine Goya.

Photography is by Giaime Meloni.