The Testone Factory is set inside a former iron foundry in Sheffield's previously-industrial Kelham Island quarter, which has been the site of various factories since the 1600s.

London-based studio Teatum + Teatum were approached by communications agency Peter and Paul to turn the abandoned foundry into offices that could accommodate its growing number of employees.

Along with offices for their staff, Peter and Paul wanted to create a space that would serve young creatives from the surrounding area by offering places to work at reasonable rents.

Overall 50 per cent of the 400-square-metre factory is dedicated to offices for Peter and Paul, while the remaining space has been opened up as a co-working space for use by small independent businesses and creative entrepreneurs.

"It requires an openness to new working methods and spatial organisations but can result in possibilities for both small and big organisations," brothers Tom and James Teatum, co-directors of the practice, said in a statement.

A timber framed studio with polycarbonate walls sits at the building's centre, which the architects hope will act as a "space for speculations" – here film screenings, talks, readings or other events can be hosted. 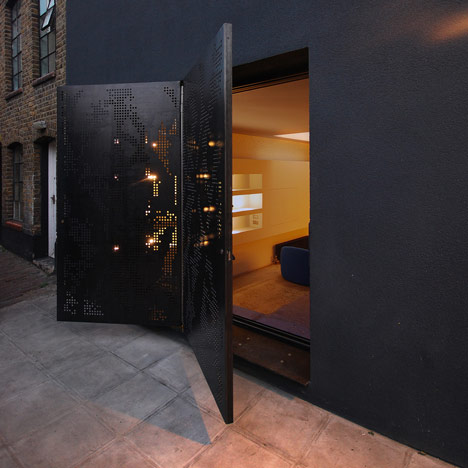 "Importantly Testone connects with the city locally at street level, and as an idea. It shows how regeneration at a local level can contribute and be a positive catalyst for change," continued the practice.

The studio is flanked by two wings – while the east wing plays host to a handful of micro offices, the west side accommodates a kitchen, meeting room and a small gallery where up-and-coming artists from the local community can exhibit their work to the public.

Accessible at street level, the gallery features a projection screen and a large, gridded shelving unit where a curated selection of objects can be displayed.

The building's library also has an outdoor terrace that cantilevers out over the nearby River Don. Splashes of colour are provided throughout by bright red storage and textual wall art.

"Whilst the factory is no longer there today, the name 'Testone Factory' reflects the rich heritage Sheffield has in the production of goods and products, and was a an approach we took to considering the space as a factory for the production and experimentation of ideas," James Teatum told Dezeen.

Sheffield is set to undergo a number of further developments – at the end of last year Carmody Groarke revealed designs for a new art centre with an accompanying suite of studios, while Mikhail Riches released plans for the second wave of regeneration works to the city’s brutalist Park Hill estate.