London's Design Museum has returned around a third of the pieces of work in its blighted Hope to Nope exhibition to the artists and designers involved, on their request.

The artists demanded that their works be removed in an open letter posted on the Campaign Against Arms Trade website, in response to the museum hosting a private event for Leonardo, an Italian leader in the aerospace and defence industry on July 17.

They called for their work to be removed by August 1. The Design Museum complied with this request, with entry to the exhibition now free until its scheduled closure on August 12.

Where work has been taken down, the museum has left the walls of the exhibition space empty, bar a caption attributed to its directors Deyan Sudjic and Alice Black that reads: "This artwork was removed at the request of the lender who has objected to a private event by an aerospace and defence company that was held at the Design Museum."

It goes on to say that the museum is proud of the exhibition and aims to give a platform to different views without taking a position themselves.

Works removed in protest of "artwashing by the arms industry"

Signatories to the letter, whose work has now been returned, include political artist Peter Kennard, The Space Hijackers (official protestors of the London 2012 Olympics), BP or not BP?, and Shepard Fairey, designer of the Obama HOPE poster from the 2008 election campaign.

A video on BP or not BP?'s website explains the artist's motivations for removing their items and sets their actions in context.

"This is the first time that artists have actually withdrawn work from a museum in protest at an attempt at a kind of artwashing by the arms industry," said Gavin Grinder, a curator of the Disobedient Objects show at the V&A museum, who participated in the season of events relating to Hope to Nope, and has been protesting alongside the artists. 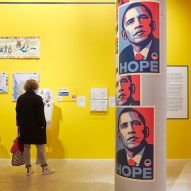 "I think it's a real tipping point for the sector that other museums should be listening and paying attention to these events," continued Grinder, "that they tell you something about the shift in acceptability of the oil industry and the arms industry in public debate"

The protesting artists are currently in discussions to mount an exhibition of the removed artworks at an alternative exhibition space, possibly during the London Design Festival, and are looking at venues in Brixton. They hope to confirm details next week.

Some of the artists works have already found new homes, while others have created new works in response to the events.

Dr.d's Curfew Social Cleansing poster has found a new home on the advertising hoarding at a local bus stop.

Kennard had previously donated Union Mask, an image of a gas mask spewing missiles that features both the American and British flags, to the museum's permanent collection, but it will no longer form part of this or of the exhibition.

"I certainly don't want my work to be viewed during a jolly by arms dealers at the museum," said Kennard in the video.

He has now produced a work daubed with red paint that reads "Stop warmongers Design Museum".

It is the hope of those protesting with banners that read "the revolution will not be compromised" that the museum will not "use art to legitimise those profiting from war, repression and destruction", from a statement they pitched to appear in place of the removed works. They are pushing for a revised funding strategy.

The museum insists that their funding policies are "in line with those of our peers in the cultural sector", but have nonetheless committed not to hold any private hire events for defence, fossil fuel and tobacco companies while they review their approach.

They stress that they receive just two per cent of their funding from the public purse and "work hard to raise the income to support our exhibition and learning programmes."

Although the museum has removed the works, the artists were also disappointed with the institution's response to their request.

"This whole protest was very much initiated and run by artists with work in the exhibition," said Danny Chivers from BP or not BP?, whose Elizabethan ruff based on the petrochemical company's logo has been removed from the exhibition.

"[This] is why we were so upset and offended when the Design Museum put out its badly-judged and inflammatory statement about how we were all in thrall to some mysterious external 'professional activists'."

Images courtesy of BP or not BP? unless stated.