California architecture studio Ozel Office has created a blobby robotic sculpture that changes shape in the presence of people, or through the movements of those wearing a matching virtual reality headset.

Cypher is an interactive robotic sculpture that is controlled by sensors, scanners and virtual reality (VR) technology. The sculpture inflates and deflates when people or objects are in its proximity, and also based on commands given by a person wearing a connected VR helmet.

The "cyberphysical sculptural installation" was designed and developed by Ozel Office, a Los Angeles studio that explores the intersection of architecture and technology. The firm is led by architect Güvenç Özel, who is a faculty member at the University of California, Los Angeles (UCLA). The Cypher project was largely funded by a grant from Google's Artists and Machine Intelligence Program.

Once publicly launched, Cypher will be the first robotic sculpture that is simultaneously controlled by physical sensors and VR, according to the team. The project aims to challenge notions of what is real and virtual and to merge domains that are typically viewed as distinct.

"Cypher creates a bridge between the physical and digital worlds, collapsing them into the same experiential plane through a combination of a virtual reality simulation and sensor-based human-robot interaction," said Ozel Office in a project description.

"Cypher has an ability to translate concepts and experiences that are traditionally seen as opposite domains: sculpture and architecture, digital and physical, visual and tactile, material and simulated."

The sculpture has a T-slotted aluminium frame with 3D-printed steel joints. Within the frame, the team placed an air compressor and a computer, which serve as the "brain" of the sculpture. These components are connected to sensors, valves, actuators and other elements that play a role in the sculpture's movement.

For the "skin", the team used flexible 3D-printed panels made of silicone and carbon fibre-infused thermoplastic. The spiky texture was influenced by the skin patterns of natural creatures, and is meant to challenge the aesthetic expectations of robots. The sculpture's dark hue also conveys a message and blurs one's reading of the object.

"The black glossy colour is used to enhance the mystique of the object further, therefore blurring the true morphological qualities of the sculpture through a play between the absence of light and variable reflection," said the team.

The skin has a series of "soft robotic clusters" with infrared sensors, which are connected to solenoid valves. These valves communicate with the computer, and control the inflation and deflation of the sculpture. 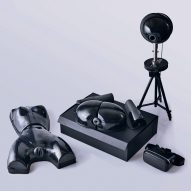 "Each sensor directly controls a solenoid, which feeds air into the individual soft robotic silicon clusters, allowing the clusters to pulsate," the team said.

Attached to the top of the sculpture is a lidar scanning device, which uses pulsed laser light to detect objects in the surrounding environment. Lidar scanners, which are commonly used in self-driving vehicles, fire laser beams in multiple directions and record data points each time a beam hits a surface. The map of data points is known as a point cloud.

The Cypher's lidar can detect the presence of objects up to 40 metres away. Running on custom software, the lidar generates a point cloud, which in turn determines the movement of the sculpture in real-time.

The team created a series of pre-programmed behavioural patterns, which are based on the proximity of viewers. The closer a viewer stands to Cypher, the more the sculpture breathes in and out, resulting in a highly amorphous form.

"Cypher initially 'greets' the user with a full inflation, and the closer the user gets to the sculpture, the further away its shape becomes," the team said.

To enable Cypher to shape-shift more naturally over time, the team incorporated machine-learning capabilities into the computer software.

"The experimental machine-learning application allows Cypher to 'develop' motion patterns the more it gets exhibited, which eventually allows it to veer away from a typical finite state machine," they added.

In addition to the infrared sensors and lidar scanner, Cypher's movement can also be controlled by a person wearing a VR helmet. The black headpiece is made of the same materials, and was fabricated using the same process, as the sculpture. Incorporated into the helmet is VR technology that runs on Unity, a cross-platform game engine.

While wearing the headset, the user is "teleported" to the sculpture's interior and experiences several different VR scenes. The user can direct the sculpture to change shape in real-time through hand gestures.

"The VR headset has embedded sensors that use inside-outside tracking to position the headset in space, as well as the hands of the user," the team said.

The helmet, like the sculpture, changes shape. Based on the wearer's actions in the VR environment, the headpiece inflates and deflates, in turn, "fusing the user into the spectacular motion of the sculpture".

Other research involving robotics include the Dactyl robot hand by OpenAI, which exhibits "unprecedented dexterity", and a robot developed by Cornell University engineers whose soft skin gets goosebumps or becomes spiky based on its internal state.

Photography is by Ozel Office. 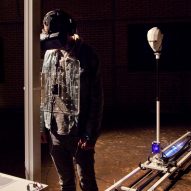