Swiss studio Urben Seyboth has refurbished a mid-century house near Zurich, preserving original details such as the board-marked concrete facades but opening up the interior to create a sequence of brighter spaces.

Built in the 1960s, Villa Forch is located in a village on the outskirts of the Swiss city. Urben Seyboth, headed by Daniel Urben and Jakob Seyboth was tasked with modernising the property to suit the requirements of a family with two children.

The house is exemplary of the style adopted by the country's avant-garde architects in the postwar period and features many elements that were considered worth maintaining during the renovation.

"The then-common combination of plastered masonry and concrete is skilfully applied and shows a lot of perfect details," the architects pointed out.

"Throughout the process, a great deal of attention was paid to the preservation of the facade whilst completely renovating the interior of the house."

While the exterior is largely left as found, the house's single-storey interior is completely transformed. It now contains a more open-plan layout, better suited to the contemporary lifestyles of its occupants.

A previously enclosed kitchen has been opened up to connect it with the living space, making the most of the light and views available through the floor-to-ceiling windows.

The kitchen looks directly onto a dining area flanked on either side by sliding doors set into black metal frames. The doors open onto patios that function as extensions of the living spaces. 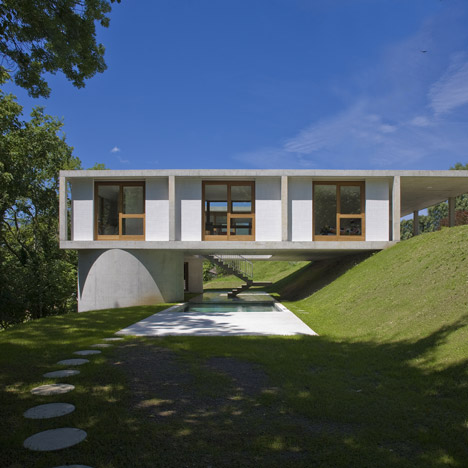 Beyond the dining area is a lounge with two glazed corners framing views of the garden. A fireplace is integrated into a pillar that separates the living and dining zones.

The house features an L-shaped plan, with a wing that previously accommodated three bedrooms now adapted to contain a master suite for the owners.

A former granny flat occupying the building's basement was entirely gutted and replaced with three bedrooms and a bathroom that provides the children with their own dedicated space.

The sweeping staircase that descends from alongside the kitchen to the basement level was retained and refreshed. The architects chose to swap the marble treads for parquet to match the flooring throughout the rest of the house.

All of the bathrooms were updated, along with the kitchen and all internal joinery, to create a sequence of consistent spaces united by a warm and neutral material palette.