A trademark application made earlier this month has given a clue to the name and crest of David Beckham's new Miami football team, and the year they aim to start playing.

UPDATE: David Beckham confirmed in a press conference on 5 September that his team will be named Internacional Club de Fútbol Miami, and will use the crest pictured here.

An application was submitted for a round pink and black badge by MIPH, a company that has registered several names for a Miami football club, on 10 August.

The badge features two back-to-back cranes – a bird native to Miami – on a central crest, with their legs entwined to form an M. The colour scheme fits with the pastel art-deco palette found on many Miami buildings.

At the base of the badge are the Roman numerals MMXX, meaning 2020, which would suggest that the team plans to be playing in two years time.

The badge also hints that the team will likely be called Internacional Club de Fútbol Miami, which could be shortened to Inter Miami.

On 29 January 2018, the Miami Beckham United Group was awarded the 25th franchise in Major League Soccer, an American men's professional soccer league sanctioned by US Soccer. 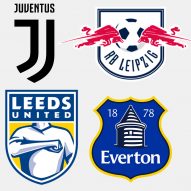 The league currently comprises 23 teams, including LA Galaxy, where Beckham played between 2007 and 2012.

The logo was trademarked by MIPH, the same Delaware-based company that earlier this year trademarked a series of potential names for the club, including Miami Freedom, which is now considered to be the proposed name for the club's new ground.

Residents to vote on location of club

The latest plan is for a 28,000-seat stadium on the former site of Melreese Country Club next to Miami International Airport. The proposals include a 23 hectare park, a hotel, shopping precinct and public football grounds.

Residents will vote in November to decide whether to authorise the city to negotiate an agreement to develop the park.

Miami hasn't had a soccer team in the league since Miami Fusion ceased playing in 2001. Beckham's team will be the first to be based in the city itself, as Miami Fusion played in Fort Lauderdale, 30 miles to the north of the city.

The rebrand of football badges has often been controversial, from the update of Leeds United's badge being dropped, to comparisons of the Premier League's rebrand for the 2016/2017 season to the logo for the UK Independence Party.

Image courtesy of the US Trademark and Patent Office.