Wood is the key to a more sustainable building industry, says architect John Klein, who has led Massachusetts Institute of Technology students in designing a large community centre from mass timber.

The Longhouse is a 40-foot-high structure to be made from laminated veneer lumber (LVL), one of a new class of engineered wood products that are able to withstand high levels of stress.

The material would allow the Longhouse to contain a large enclosed space – 140 feet (43 metres) long and 50 feet (15 metres) wide – that is uninterrupted by any internal structural supports.

Klein, a research scientist in MIT's architecture department, said that mass timber like LVT offered a sustainable alternative to concrete and steel, and had become economically viable as well.

"Mass-timber buildings offer a promising solution for housing and carbon reduction goals, in addition to providing a sustainable solution for cities to address urban sprawl."

In contrast to emissions-intensive concrete, mass-timber production is low-impact and non-toxic. It also has the additional benefit of storing carbon from the atmosphere that has been sequestered by the tree as it grew. "The building is a carbon sink," said Klein.

Mass timber has already been used in several US buildings — including the four-storey John W Olver Design Building at the University of Massachusetts Amherst — but Klein says the country is falling behind the likes of Europe, Australia and Canada.

"The current North American building codes do not support mass-timber building prototypes with above six stores, an impediment which significantly limits the implementation of mass timber in the mid-rise range," he told Dezeen, though adding that he expects the International Building Code — the basis for most US jurisdictions — to change in 2021.

Plans for a 12-storey building in Portland that would have become the tallest all-timber building in North America were put on hold last month, which the developers put down to cost. 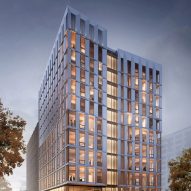 The Longhouse — designed by cross-disciplinary students in the Mass Timber Design workshop in MIT's architectural department — aims more for scale than height.

Intended to be a flexible community space used for purposes such as co-working, social events and exercise classes, the building would comprise a series of arches cut from six-inch-thick (15-centimetre) LVL panels.

These arches are arranged in a pleated pattern that accommodates plenty of solar panels, and creates windows for natural light and passive solar heating.

"An interesting design process incorporating engineering and aesthetic considerations ultimately pointed us towards the idea of building up each arch element as a hollow triangular cross-section," said Demi Fang, a graduate student in MIT's Master of Science in Architecture Studies.

"The structural depth achieved by building up the triangular section helps us achieve the clear span desired for the communal space, all while lending a visual language on both the interior and the exterior of the structure that we thought worked well," she added.

"Each arch tapers and widens along its length; because not every point along the arch will be subject to the same magnitude of forces, this varying cross-section depth both expresses structural performance while encouraging material savings."

The arches would be prefabricated and bolted together on-site.

The Longhouse will be presented this October at the Maine Mass Timber Conference.

There are no plans to build it at present, although Klein's next project — funded by a 2018 Wood Innovation Grant from the US Department of Agriculture — will look to build a demonstration model in New England with the help of manufacturing and engineering partners. 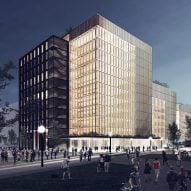