The colourful free-standing ornaments are made of powder-coated steel and are designed to be placed around the home and garden.

The studio, led by Ivi Diamantopoulou and Jaffer Kolb, took the garden gnome as a starting point for the project. They took recognisable elements of gnomes, such as their distinctive cone-shaped hats, and abstracted them into simplified shapes, which were then cut from sheets of steel.

Like traditional garden gnomes, the figures are designed to be light­hearted, playful, figurative, and unapologetically kitsch, according to the designers.

"We like gnomes!" New Affiliates told Dezeen. "We like that they're purely decorative, that they offer a fun formal problem balancing composition, character, and shape. We never wanted to stray too far from familiarity, but to blur figuration into abstraction and work through issues of taste and material."

Each gnome is made from two flat planes of steel that slot together to create a self-supporting structure. All of the gnomes can be flat-packed and can stack together for easy transportation. 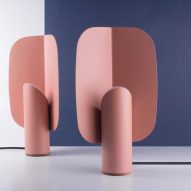 The gnomes are currently available in pink, yellow, white or blue powder-coated steel and come in three shapes: Gnome Without Hat, Gnome With Hole, and Gnome Sleeping.

"These objects provide a rich set of associations, importing the idea of the American yard to new sites and giving the lawn a renewed aesthetic order that is both beautiful and familiar, invaluable and decorated," said the designers.

"The gnomes will be at home on a 28th floor terrace, a roof garden, a backyard, a beach, a fireplace, or a window sill."

In 2008, London-based designers Vitamin presented a line of contemporary ceramic gnomes that were decorated with illustrations inspired by London's wide-ranging expanse of street art.

Photography is by Zach Helper, except where stated otherwise.