Skeleton is a sculptural set of cutlery that can be hooked onto tableware, designed by Japanese studio Nendo for Belgian brand Valerie Objects.

Nendo's lead designer Oki Sato created four pieces for the set: a spoon, a teaspoon, a fork and a knife. Each one features a distinctive kink where the handle joins the head.

True to Sato's typically minimal approach to design, the forms are designed to use as little material as possible while still retaining functionality.

The designer likens the slender pieces to a skeleton seen in an X-ray.

Thanks to the range's crooked handles, the pieces can be hooked and stored in various places around the kitchen, for example balanced over the edge of a plate or bowl. The teaspoon can also be hooked onto the rim of the cup.

Available in stainless steel or a black PVD coating, the set comes with a dedicated stand and wall hook for display purposes.

"Oki Sato was eager to join the cutlery project as he had never designed a cutlery set before," explained Veerle Wenes, co-founder and art director of Valerie Objects. "The outcome will definitely make you smile."

Nendo is the latest in a long line of international designers to create a cutlery series for Valerie Objects.

"When I approached the designers and design teams to create a set of cutlery for Valerie Objects, I knew that they would each use their expertise, background and knowledge to come up with a completely divergent range of results," said Wenes, speaking about the wider collection.

"Some of them had already experimented with cutlery, others had been fascinated by the design [of cutlery] for years, while for yet others it was their first foray into designing this modest eating tool. But whatever stage they were at, they all succeeded in delivering a surprise." 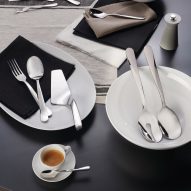 As well as cutlery, the Antwerp-based brand has previously launched a sombre puppet theatre by Belgian studio Robbrecht en Daem, and a stack of colourful food-serving platters and a sculptural trivet by Belgian design duo Muller Van Severen.