Blloku Cube – a mixed-use block with a facade of aluminium triangles, designed by Stefano Boeri Architetti – is now under construction in the Albanian capital.

The seven-storey building is set to boast an intricate facade made up of three-dimensional aluminium triangles, which will act as a sunscreen to shade its glazed walls.

Blloku Cube takes its name from its form, and the central Tirana neighbourhood that it is located in.

It is roughly the shape of a cube, with a square ground floor plan measuring approximately 30 metres by 30 metres. The lower two floors of the 1,116-square-metre building will contain a shopping centre, with five storeys of office space above.

A roof garden restaurant will occupy the top of the building.

The bespoke facade will front all of the office floors, as well as the upper level of retail.

Renderings show the triangles taking on a range of golden shades, as they reflect light from different angles.

"The resulting effect is that of a vibrant and iridescent surface, a pattern of aluminum triangles playing with the sunlight to create reflections in different nuances of colour," said Stefano Boeri, founding partner of Stefano Boeri Architetti. 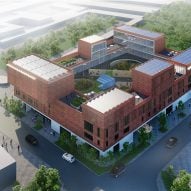 "This particular cladding solution, specifically designed for our first Albanian project, plays an essential role in defining the uniqueness of the building and contributes to underling its importance as a new landmark of this urban district", added Francesca Cesa Bianchi, project director for the studio.

The block is one of several big architecture projects buildings underway in Tirana.

BIG has designed a bow-tie-shaped theatre for the city, while MVRDV is planning to convert the city's pyramidal monument to communism into a technology education centre.

Stefano Boeri Architetti is also working on three new schools for the Albanian capital, which will remain open 24-hours a day to double up as community centres.