Historic log structures, A-frame huts and modern holiday homes feature in a sweeping exhibition at the Vancouver Art Gallery, which chronicles the development of cabins in North America over the past few centuries.

Occupying the entire second floor of the gallery, Cabin Fever explores the North American cabin as an architectural form and a cultural construct – tracing its evolution from the 1600s to present day. It is the first exhibition in North America to investigate the cabin typology and its role in contemporary culture, according to the gallery.

While the cabin initially served as a pragmatic solution to a need for shelter, it has come to "represent an idealistic vision of an unattainable past".

"So potent and seductive is this image that increasingly we present it as a panacea to the modern condition," the gallery said in a statement. "This is both an obvious response to our over-stimulated world and a puzzling outlet for a culture intent on being connected."

The exhibition, which runs until 30 September 2018, was curated by California-based writer Jennifer M Volland in collaboration with the gallery's senior curator, Bruce Grenville, and associate curator, Stephanie Rebick.

Contemporary work in the exhibition includes the A-frame Whistler Cabin in British Columbia by Scott & Scott Architects, and the Cliff House by MacKay-Lyons Sweetapple Architects that extends over a rocky bluff in Nova Scotia (main image). 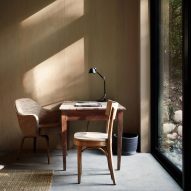 10 countryside cabins with interiors that reflect their remote locations

A number of historic dwellings are shown. Among them are the 1930s Bennati Cabin by Rudolph Schindler, credited as the first modern A-frame home built in America.

The triangular dwelling was constructed in the mountainous town of Lake Arrowhead, California, where it still stands today. A 1953 A-frame cabin in Vermont by architect Henrik Bull is also on view.

The curators incorporated several installations into the exhibition, such as a wooden geodesic dome, and a faceted timber enclosure with metal legs. The latter is part of Ken Isaacs' line of Living Structures, which the experimental designer introduced in the 1970s.

A full-size prepper's cabin is also on view. Created by Canadian artist Liz Magor and first shown in 1996, the Messenger cabin is stocked with food, weapons, and other items deemed necessary for survival.

Founded in 1931, the Vancouver Art Gallery is a prominent cultural institution in western Canada. This is the second architecture-themed show that the gallery has staged in recent years. In 2013, it presented Grand Hotel: Redesigning Modern Life, which looked at the cultural impact of the hotel.