Melbourne-based studio Carr designed Red Hill Farm House, based on a concept created by Jackson Clements Burrows Architects, for a site on an area of farmland surrounded by open paddocks that sweep down towards the curving coastline.

The property is embedded in the top of a hill and features a low, elongated form that minimises its visual impact as well as its exposure to the often wild and inhospitable weather.

The house's design and materiality are influenced by the region's rural architecture, including its own working stables, and seeks to implement a modern take on this well-established style.

"The volumes are utilitarian in their typology, where function is reduced to a minimum and openings are large and dramatic," the architects explained. "A monochromatic palette is tempered by the surrounding pastoral landscape."

The building comprises a series of simple, interconnected volumes that are staggered to follow the topography of the site and respond to the programmatic requirements.

The low-lying profile provides a familiar first impression that is given a modern twist by a roofline that folds and creases to create a series of angular forms influenced by the rugged ranges of the region's landscape.

"At first hidden from view, the roof line unfolds on approach, revealing itself fully on arrival in a playful origami of angles and immediately announcing the modernist approach taken," Carr added.

The angled roof features deep eaves to protect the facades from the summer's strongest sun. The eaves are supported by a colonnade that wraps around the building and provides a vertical rhythm.

Spaces dedicated to different aspects of family life are distributed between three timber-clad pavilions arranged in a U-shape around a central courtyard that evokes the yards found at traditional farmsteads.

The courtyard provides a tranquil and sheltered space at the heart of the house, which is connected to the living areas by corridors lining its edges. 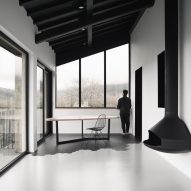 These circulation spaces incorporate large openings at either end that provide views through the building towards the valley beyond and allow breezes to naturally ventilate the interiors.

The use of natural and sustainable rough-sawn, black-stained timber across the exterior creates a cohesive aesthetic that recalls the barns dotted throughout the Mornington Peninsula's wine region.

The dark facade treatment is echoed in the tone of the kitchen units and fire surround, which contrast with the otherwise light and bright interior.

Polished-concrete flooring and pale timber ceilings introduce warmth and texture to the material palette, while black-framed glazing enhances the views across the countryside.

Earlier this year, Architecture office Deltastudio used a palette of monochrome materials to create light-filled rooms with views of the surrounding countryside at a modernised farmhouse near the Italian town of Caprarola.