Dezeen spoke to British-Japanese design duo Studio Swine about the future of technology, art and design during this talk held in New York at Brooklyn creative space A/D/O.

Studio Swine is a London-based, multi-disciplinary design studio founded by Azusa Murakami and Alexander Groves. Their past installations reference the natural world in a variety of ways, including a sculptural tree that blossoms with mist-filled bubbles and a towering structure that "breathes" scented vapour rings.

Murakami and Groves founded their practice in 2010 after graduating from London's Royal College of Art, and are currently undertaking a design residency at A/D/O, which will result in a series of new works that will be exhibited later in the year.

A/D/O is a Brooklyn based creative space, and its team work with designers to help create and showcase their projects. The space opened in 2016 in a converted warehouse in Brooklyn's Greenpoint neighbourhood, as part of a design initiative by MINI.

In this talk, Dezeen's US editor Dan Howarth speaks to the duo about their previous work, their latest investigations, the potential for using technology within art and design, and their upcoming work in conjunction with their residency at A/D/O. 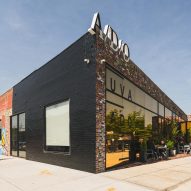 This is the third in a series of talks hosted by Dezeen at A/D/O. The previous two focussed on the design and architecture scenes in New York, and featured panels of local designers and architects.

You can watch the first and second talks on Dezeen, or our Facebook page.