Studio Swine has released a movie revealing its Milan design week installation for COS – a tree-like structure that emits pale bubbles, which dissolve into white mist as they burst.

Called New Spring, the six-metre high structure consists of slender tubes that extend up and out like the branches of a tree.

Large translucent bubbles emerge from the ends of each branch. These bubbles burst when they come into contact with skin, but not when they touch textured fabrics – meaning visitors can handle them with gloves.

As they burst, a pale mist is released.

Like many of Studio Swine's past projects – which include accessories made from hair and furniture produced from ocean plastic – the installation is an exploration of unusual materials.

Recycled aluminium was used to create the sculptural tree. It is on show inside Cinema Arti, a movie theatre built in the 1930s by local architect Mario Cereghini.

The pair said they looked to Milan's architectural heritage when developing the form of this installation.

"We were immediately drawn to the Murano chandeliers housed in private Milanese palazzos and, by contrast, the tradition of modernist Italian design," they explained.

"With a desire to create a communal experience, another key reference for us became Italy's public fountains, one of the country's greatest luxuries."

Studio Swine and COS first unveiled their plans for the ""blossoming sculpture" by releasing a teaser movie in February.

COS creative director Karin Gustafsson said the project would draw on design principles shared by Studio Swine and the brand.

"Our many common values – a focus on timelessness over trend, functionality with beauty, and the exploration of materials – means that working together is a very natural fit," she said at the time.

Murakami and Groves established Studio Swine in 2010, shortly after graduating from the Royal Collage of Art. They named their studio after their first project, a mobile food stall for cooking and selling pig heads, after being asked to publish it by Dezeen.

They become the latest in a series of designers to work with COS in Milan, following past collaborations with Japanese architect Sou Fujimoto, Brooklyn studio Snarkitecture and Japanese design studio Nendo. 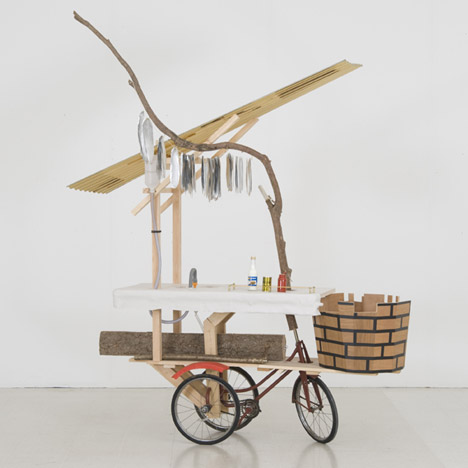 Both Studio Swine and COS ranked on the Dezeen Hot List – a guide to the most newsworthy players in architecture and design. Studio Swine came in at 292, while COS was listed at number 45, the second-highest position of any fashion brand.

New Spring is on show at Cinema Arti, Via Pietro Mascagni 8, until 9 April 2017.

More COS and Studio Swine