In the first of our Spirit of the City talks held at creative space A/D/O, designers discussed the creative scene in New York, and their experiences of living and working in the city.

Speakers discussed the challenges and benefits of running their studio's in New York City, as well as the creative scene at large, and was moderated by Dezeen's US editor Dan Howarth. 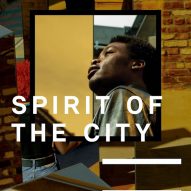 The talk coincided with an installation designed by British studio United Visual Artists, titled Spirit of the City at A/D/O. It comprises a set of gold-mirrored rotating columns and is open to the public for free until 2 September 2018.

This was the first of two panel discussions themed around the creative scene in New York City, presented by Dezeen and held at A/D/O in Brooklyn's Greenpoint neighbourhood.