The Royal Academy of Arts in London is exhibiting a design for a city island, populated entirely with buildings designed by Italian architect Renzo Piano.

As the centrepiece of Renzo Piano: The Art of Making Buildings, a retrospective currently on show at the RA, the "imaginary island" brings together 102 of Piano's projects from the past 50 years.

Buildings such as The Shard, Paris Courthouse and the Whitney Museum of American Art are organised in the form of a fictional metropolis, complete with roads, mountains and trees.

Renzo Piano Building Workshop designed and built the scale model over a period of two years. It comprises 88 of Piano's completed projects, along with 14 that are currently under construction.

Many of these are positioned along a central avenue that spans the full length of the island, north to south. At the southern end is Kansai International Airport Terminal, by far the largest project on the map, which was built in Osaka in 1994.

Other buildings positioned along the avenue include the Mercedes-Benz Design Centre, the B&B Italia offices and the not-yet-complete Academy Museum of Motion Pictures.

At the northern end of the avenue is a bay, spanned by Ushibuka Bridge that Piano built in Japan in 1996. It connects the Bercy 2 Shopping Centre from Paris with the Eolic Windmill from Genoa, Piano's hometown.

The island's coastline relates to the various seaside buildings Piano has designed over his career, from the Centro Botín in Santander, Spain, to the Astrup Fearnley Museum in Oslo, Norway.

There are also boats designed by Piano moored up at the water's edge, ranging from the huge Cruise Ships he designed for P&O to the more modest Kirribilli MAS60 sailing boat. 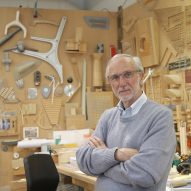 Hills and mountains are dotted across the island, providing locations for some of the architect's more rural projects, as well as large museum and stadium projects. For instance, La Rocca Winery sits atop a peak to the southwest of the island, while the San Nicola Football Stadium can be found to the east.

There is also one tiny building – the Diogene micro house that Piano built on the Vitra Campus.

Renzo Piano: The Art of Making Buildings opened the the RA on 15 September and continues until 20 January 2019. The show offers a detailed look at 16 of Piano's most important buildings.

These 16 projects are all public buildings – Piano suggests that these are the projects that matter most to him.

Piano, 81, is on the world's best-known architects. He ranked at 44 on the latest Dezeen Hot List.

Speaking to Dezeen at the exhibition, the architect also revealed that the Italian government has accepted his invitation to replace the collapsed Ponte Morandi bridge in his hometown of Genoa.