Architecture firm OMA has completed two of its three residential towers in Miami's Coconut Grove, both punctured with grids of covered terraces around the exteriors.

The studio has reached a major milestone in its Park Grove project – a luxury residential complex in the neighbourhood 10 minutes drive south from Downtown Miami.

Two of the site's three buildings – Two Park Grove, and a nearby club for residents – are complete, while One Park Grove remains under construction.

Both of the condo towers are peanut-shaped in plan, while the Club Residences rises as a cylinder. All three are 23 storeys tall.

The completed buildings look almost identical to the renderings first released by OMA in 2014. As planned, the two apartment towers are sited close together, with the club building off to the side.

A similar twin-tower concept in Coconut Grove was used by Danish firm BIG, which completed its pair of twisting condominium buildings in 2016.

"We wanted to create an organic form, rather than too much of a defined tower," said Shohei Shigematsu, head of OMA New York, in an exclusive interview with Dezeen when the project was first announced. 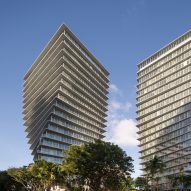 Two Park Grove houses 3- to 5-bedroom residences, each with its own terrace that follows the curve of the exterior. Apartments come with 12-foot-high (three-metre) ceilings and full-height windows.

Interiors by New York firm Meyer Davis, which were revealed along with construction photos in November 2017, will feature palm-tree-like designs on the ceilings to relate to the property's lush surroundings.

Landscape architecture by Enzo Enea comprises an outdoor pool and lounge, a sculpture park, a five-acre (two-hectare) garden, and an amphitheatre with grassy steps.

Developed by Terra and The Related Group, Park Grove is the final plot in the waterfront Coconut Grove area, forming part of a "wall of towers" along Bay Shore Drive.

Many of the world's most famous architects and studios have residential projects either completed or underway in and around Miami.

Foster + Partners, Renzo Piano, and Jean Nouvel are among the others working in the Florida city.