Called Grove at Grand Bay, the luxury housing development is located in the historic Miami neighbourhood of Coconut Grove, once known as an enclave for artists and writers.

The buildings, which together contain 98 units, are the first residential towers to be constructed in the community in over a decade, according to the team.

"Coconut Grove is a special place with a well-defined soul, so it was important that Grove at Grand Bay respond to its community through a design that was respectful and distinctive," said Bjarke Ingels, founder of BIG, in a statement.

Rising 20 storeys, the twisting towers are sheathed in bands of glass. The floorplates are extended on all sides, forming generous balconies and deep overhangs that help mitigate solar gain.

The buildings overlook the bay and a new park, as well as offering views of downtown Miami. A curving porte-cochere topped with a green roof sits at the base of the towers.

"By creating twisting towers that rise side-by-side but never cross paths, we were able to optimise views, outdoor spaces and the flexibility of our floor plans while allowing the buildings to interact with one another," Ingels said.

Amenities include a swimming pool, spa, fitness centre, pet spa and private dining room for residents. A kids playroom is fitted with whimsical decor, including seating shaped like giant pebbles.

Work by artists such as Tara Donovan, Olafur Eliasson and Jeppe Hein is displayed throughout the development.

The BIG towers have helped trigger a rejuvenation of Coconut Grove’s business district, which has seen the arrival of upscale shops and restaurants, according to the developer.

The project is backed by Terra, the developer behind a trio of towers by OMA currently under construction in Coconut Grove. The real estate company is backing other notable Miami projects, including Eighty Seven Park by Renzo Piano and West 8, and Botaniko Weston by Chad Oppenheim and Roney J Mateu.

BIG was founded in Copenhagen in 2005 and opened a New York office in 2010. Recent projects include a new office building in Philadelphia, an apartment tower in Manhattan and a design for the world's first Hyperloop high-speed transportation system, slated to be built in Dubai. 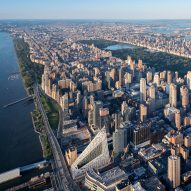